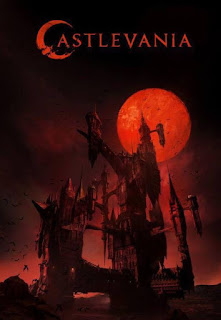 For those not familiar with what Castlevania is, Castlevania is actually a video game series produced by Japan but based on the Dracula stories of old in Western fiction. While the video games started out simple, the plot lines grew and they eventually established a large (and often confusing) time-line between the Belmont family and their quest to vanish the dark lord himself Dracula. The Castlevania TV series is a Netflix original and I was surprised to see how hyped people were for it, especially as video game adaptions often stink. The TV series (so far) is based mostly on the events of Castlevania III: Dracula's Curse as it was for a long time the furthest back in the timeline of games. Now did this TV series or did it join the rest of the video game adaptations? 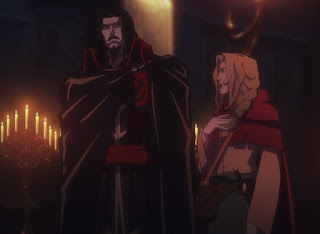 The story sets off with Dracula being more a reclusive "person" than a monster seeking to terrorize parts of Eastern Europe.  A extremely bold woman named Lisa walks into his castle and asks for his help in the search of knowledge and truth as she trusts science more than superstition. The vampire lord is surprisingly impressed by Lisa, and the two eventually fall in love. Lisa tries to give Dracula humanity, and she is partially successful in this mission. However the Christian Church manages to capture Lisa and has her burned to the stake for being a "witch". Dracula found out the news too late and his beloved is now ash. This causes Dracula to forever curse humanity and be its enemy. He vows to destroy the nation of Wallachia in a grand scheme of revenge. 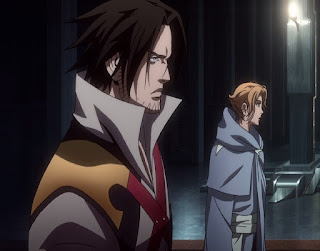 It takes Dracula sometime to gain the power to summon an army of dark creatures. However once created, his demon army easily crushes those in Wallachia and leaves very few survivors. However a man named Trevor Belmont is skilled in hunting vampires and monsters like Dracula and his creatures as his family had been doing it for generations. He eventually crosses paths with a magical woman named Sypha Belnades who is almost as deadly as Trevor is in battle. Things change forever when they meet the being known as Alucard. 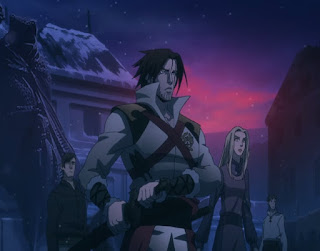 Overall I was disappointed by the new Castlevania TV series. I suppose the hype was more of the disappointment here than the actual quality of the show. It's well done in animation and story (and actually produced by a Western company despite the Japanese anime look) but the season is only four episodes long. I wouldn't have minded so much if the story didn't just end out of the blue. Netflix has renewed it for a long second season, so this one really feels like a really long television pilot. We'll have more to judge on the next part of the story, but for now I can't give high marks.

I don't have time to get to the As, let alone the C+s. Right now Terry and I are watching the "Black Orpan" series, and I'm watching "The Wire." Both series are fabulous!