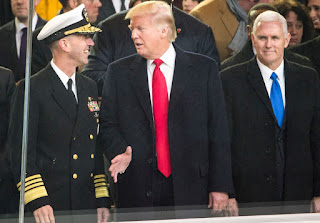 Draft Dodger Don recently confirmed that the U.S. military will no longer allow transgender people to serve in the armed forces in any way, shape, form. While I would not recommend a transgender person to serve in the military (too many homophobic and hateful soldiers in the ranks I'm afraid), I do respect their desire to join the military if they wished to do so. I really do think right-wingers can't sleep at night until they are oppressing another minority group.
Posted by Adam at 11:00 AM

This will be an interesting court battle.

Yes, can you say "Lawsuit?"

Turnip Top makes a fool of himself faster than his "tweets".
Good point on his draft dodging history, but he does like saluting
and doesn't do it very well. Perhaps he should be told that you ONLY salute when you have a hat/military cap on!!!!!

It will be interesting to see what comments this brings forth.
Don't expect anything from the old bigoted, racist 'dowagers" of Texas or that loony romance writer from Springfield who is devoid of any geographical intelligence whatsoever!

He is "AT WAR" with his FBI and Attorney General Department. What next?
And what POSITIVE thing has he done so far for the people of the USA??
Buy American???? Oh yes his family clothing businesses have their merchandise made in the "Sweat Shops" of the Peoples Republic of China!!!
Get rid of the bastard before it is too late. Feed the Trump mob to a pack of Orcas to have for dinner!
Colin

Nothing surprises me with this man anymore.

Isn't the SILENCE of the LAMBS stiffling?????????
All down their bloody prairie dog holes????
Seems that this "Turnip Top" proposal does NOT have the
backing of the Department of Defense to the extent that the
"Peanut brained DRAFT DODGER" anticipated.

I remember when the first of the newest Star Trek movie series came out. Just a few seconds, but monumental; I swear I saw a transgendered person manning the helm. No fuss, no muss, just someone in the background carrying out a job. It's what I remember about the movie most, that Star Trek was remaining faithful to its original, inclusive vision. I long for the day when we are all just people. And I say that that it is the homophobic and hateful servicemen who need to be weeded out, not the transgendered.