Fact of the Day: Eliza Jumel 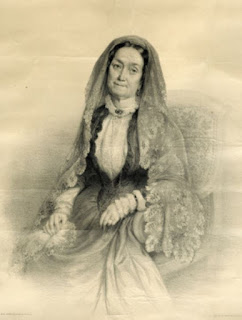 Eliza Jumel was the last wife of Aaron Burr who married her late in life and after he had been Vice President and had a very controversial career afterwards. Most believe Burr married her because she was a wealthy widow, and it didn't take long for Burr to almost ruin her own fortune. The couple split after only four months.
Posted by Adam at 12:00 AM

Email ThisBlogThis!Share to TwitterShare to FacebookShare to Pinterest
Labels: aaron burr, fact of the day, politics

Thank goodness he got out of that relationship before it got any worse!

Trying to steal dough, sure always something on the go

I hope she was able to hang on to at least some of her money.

Hopefully she go out with most of her money.

She isn't someone I know anything about. Thanks for bringing her to my attention.

Short and sweet...maybe not so sweet.

Short and sweet...maybe not so sweet.