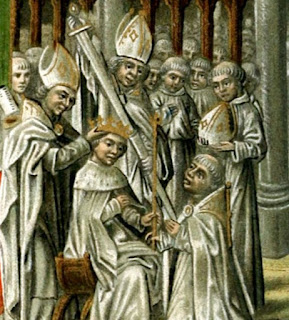 Since William the Conqueror (William I) came from modern-day France, the royal family spoke French (Norman-French) instead of the native English language. It would take over three hundred years until the first King (Henry IV) would speak English as his mother tongue since the Norman Conquest instead of French.
Posted by Adam at 12:00 AM

Interesting fact, I had no idea! I wonder how many different languages the royal families have spoken. Thank you for stopping by my blog!

Always good to have variety every 300 years

Yes, the aristocracy spoke French and the peasants spoke English, or at least the ancient precursor of English in those days.

Interesting fact for sure.

I was aware of this. French was the courtly tongue for centuries.

The present Queen and her husband speak perfect French and German!
French still remains the language of diplomacy.
Pity the Baboon in the White House on his world wind visit to Paris
to celebrate Bastille Day and the US entry into WW1 couldn't be more diplomatic or at least decent.............oogling the wife of the French President is rather UNCOUTH!
Colin

Thank you a bunch for sharing this with all of us you actually realize what you are talking about! Bookmarked. Please also seek advice from my site =). We could have a hyperlink change contract between us! learn english conversation