Fact of the Day: Princess Mary of Great Britain 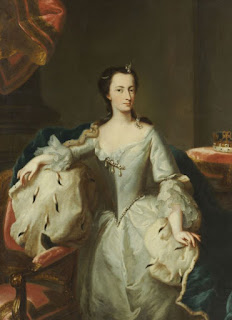 Princess Mary was the daughter of King George II, but her life wasn't very happy despite being a princess. She was married to Fredrick II of Hesse which was a Germanic state loyal to the Holy Roman Empire. Her husband was said to be a boorish brute and subjected her to spousal abuse. Things didn't get much better when he converted to Roman Catholicism, but she was supported by her father-in-law when the marriage became estranged.
Posted by Adam at 12:00 AM

I can imagine back then that people turned a blind eye to abuse, and it's sad that she had to suffer through that. Hugs...

Most royal women were pawns. But then, her life wasn't so different from many women in that time, other than her cage was gilded.

Being a real princess isn't all it's cracked up to be.

Life for many royal princesses was often awful despite the usual wealth. They were traded like property and were often very unfortunate in those trades. Still, probably a hell of a lot better than for their subjects at the time.