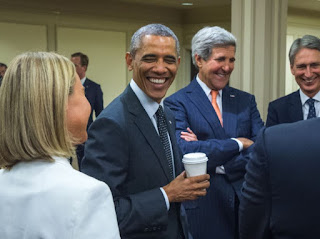 "Fox News has taken reasonable concerns about this president (Obama) and this economy and turned it into a full-fledged panic about the next coming of Chairman Mao."

I think one of the reasons politics became so intensely divisive in recent history is the extremism that spurned out of the right-wing after the election of President Barack Obama. Granted the opposition can get pretty intense no matter what party, but Obama got way more hate than any liberal before him because of his skin color. I don't remember a Tea Party of angry semi-literate white people during the Clinton years. Despite being part of the "main-stream media" they used "commentators" to spout things that would be considered libel, if they were actual journalists. Everyone on Fox and other right-wing outlets claimed Obama was a socialist/communist. Communist? His policies were barely on center at best. I will say moderates and everyone to the left really didn't know how great we had it until we knew Adolf Twitler was moving into the White House this year.
Posted by Adam at 12:00 PM

When people can't see the difference between truth and falsehood any more, a nation is in peril.

I blame Newt Gingrich for the polarization of today's politics. He impeached Clinton for no good reason, just because he could in an attempt to undo presidential elections the Republicans couldn't win without cheating. Interesting that at the time Clinton was being impeached for the Monica Lewinski affair, Gingrich was cheating on his sick wife in a parked car around the corner from the capitol.

This country is in complete chaos and it's sad.

Im not a citizen of the US but I visit often. Refreshing to see that not everyone has lost their minds :)

My favorite form of news is just jamming my fingers in my ears and going LALALA really loudly to drown everything out. I mean, I'm just as informed as the next person, if not more, but I don't have to hear all of the BS. I call that a win.

What these ignorant and arrogant Republicans do in the USA is beyond belief!
A Governor closes a public beach in New Jersey so as he and family can enjoy solitude. I know what kind of solitude I'd dish out to that mongrel and it wouldn't include sand or surf!

I really shudder to think what Turnip Top will do in Hamburg.
The WW2 fire bombing of that city, terrible as it was, will have
a competitor when Turnip Top's "toy - ie Air Force One" lands in that city.
I am sure the other 19 members of the G20 are dreading his arrival!

Barack Obama shows so much dignity. I trust that the US public saw the dignity and statesmanship of Bill Clinton at the memorial service for former German Chancellor, Helmut Kohl????????????

Unfortunately American tourists must hang their heads in shame when now holidaying overseas..............they can't all be either Canadians or the Hispanic ones, Mexicans???????
Colin

PS: Where are the former viewers of your blog, who went ape over Turnip Top, Pense and that wretched Tea Party woman, Sarah Palin.
They can't be all down Prairie Dog holes???????????????

I hope things get better soon for all of you, Adam. It's getting crazier and crazier.

Love the Twitler name..hahahaaa. It seems to show that this idiotic current president can say and do all these things and not be impeached but Clinton, who actually balanced the budget and brought strength to the presidency, was impeached for having an affair. FDR! Kennedy, Eisenhower.etc... all carried on affairs and are considered great presidents. Nixon and Reagan are highly controversial and have done things that caused Nixon to leave office were loyal to their wives. I just don't get it.

Adolph Twitler??? You just made my day! LOL