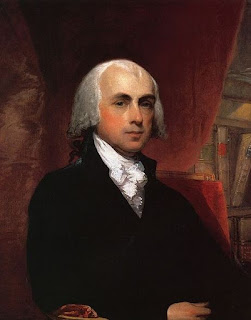 "Religion and government will both exist in greater purity, the less they are mixed together."

Even when I considered myself a religious person and a Christian, I've always understood the importance of the freedom of religion. I think it's downright scary how some right-wingers believe that the 1st amendment guarantees the right to be a Christian, but not the right to be anyone else. I remember an anti-atheist fellow who wrote the local paper who said you had to believe in something even if it's a pine tree. You know what pine trees and your god have in common? No legal right to influence law and government in the United States of America.
Posted by Adam at 12:00 PM

Im agree with you. Im a christian and always know the importance of the freesom of religion. So good post Adam!

I wish the separation of church and state was more rigorously observed.

So agree with this. I am a Catholic, but I would never ever think it's right to mix both the government and religion. That's just insane, which makes me even madder when I hear your current president spout all this nonsense, and his wife saying the Lord's Prayer before a speech. I think it's so hypocritical of them, and it alienates everyone else who is not a Christian.

PS I love that Daisy like the rainbow poop:D

The separation of church and state is one of the Founding Father's best ideas.

I wish this quote was better practised

The complete separation of church and state. That's what I believe in.

I agree with your post, Adam. Even with the separation of church and state, when I went to school (a public school, not a separate religious school), we still had the Lord's Prayer in the morning. I often wonder how they got away with that. -Jenn

The far right movement in religion has driven me from the church. I can't bear to be associated with the hypocrisy, bigotry, hate, and smug righteousness of too many of America's "Christians."