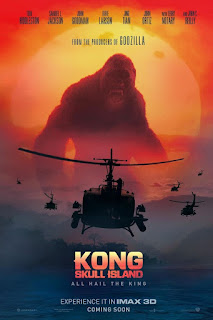 To be perfectly frank, I've never been a big fan of ol' King Kong except I did really like Peter Jackson's King Kong movie back in 2005. When I was a kid, Godzilla was always number one in my heart when it came to "giant monster" movies. This movie is now the first King Kong in about twelve years and it's part of Warner Bros.' MonsterVerse which is an attempt to create a big universe like Marvel/Disney had done with their superhero movies. The first movie in this universe was Godzilla back in 2014, but now it's King Kong's turn to shine. I heard pretty decent reviews for Skull Island but did it impress me? 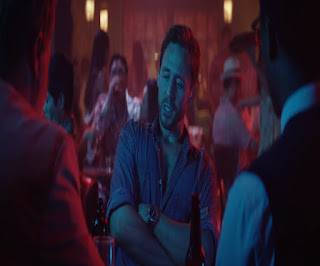 The movie is set in the aftermath of the Vietnam War. With the chaos in the county over, it's time for the government of the United States to find something new to focus on. William "Bill" Randa is a top government official who gets approval to survey a mysterious island that's apparently on par with the Bermuda Triangle in terms of missing planes and ships. He also gets some military soldiers to help on the island in-case they encounter something they'd never expect. They also have plenty of civilian scientists there for the ride as well. The special man appears to be James Conrad who is a British captain who did duty in the Vietnam War as well. However when they get to the island, the military mysterious starts dropping bombs on the landscape. Soon later, a lot of helicopters are taken down by a giant monkey known as King Kong. However they soon learn that King Kong is not a true villain, just a being (whom the human natives believe is a god) defending his land. However King Kong is not the only monster, as horrible lizard monsters sleep beneath the surface, and the humans probably just woke up a lot of the nasty little beasts. 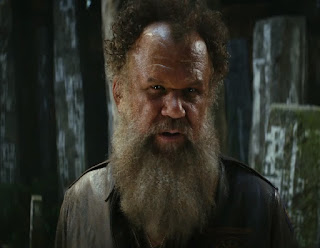 Overall I was pretty disappointed with the new King Kong movie. The CGI is something I wouldn't call bad, but it never seemed very real to me. I know it's all green screen and computers but they're suppose to make me forget that. Also the story is rather dumb, and the characters don't get much time to develop. Even with a cast with John Goodman, Samuel L. Jackson, Tom Hiddleston, and Brie Larson, you never care too much for any of them even for Hiddleston's character. The only bright spot is John C. Reilly as Hank Marlow who brings humor and humanity into a dull action movie as everyone else is more or less dead weight. While I liked (but not loved) the newest Godzilla, King Kong dropped the ball.

That figures. I wasn't too sure about this one but figure I'll wait for it to be out on demand and then watch it.

Jackson's character I just wanted to shoot in the face. Pretty meh indeed.

I agree...it was much ado about nothing..very disappointing.

That's a low scoring. I haven't seen it and now I'm not sure I want to!

I thought it was a bunch of nonsense.

I was on the fence about watching this one...thanks for the review!

Wow! With a cast like that, one would expect more. Thanks for your review, Adam!

i really likes your blog and You have shared the whole concept really well. and Very beautifully soulful read! thanks for sharing.
ตารางคะแนน