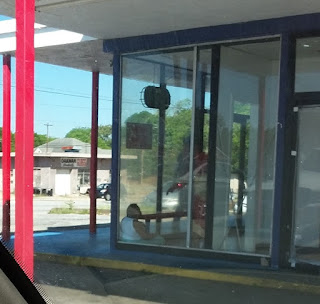 I tried to order a pizza on the phone one day and kept getting put strangely on hold. I was a bit ticked off but I wanted to see if there was a good reason for the delay. When I got to Domino's Pizza there were two female police officers and a woman sitting down on the floor. Turns out the woman was mentally retarded and had a moment where she violently started to bang her head against things. Her mother is the one who called them as she apparently had no control over her daughter. The guy behind the counter didn't like how the mom was taking care of the daughter, so I suppose this probably happens more times than I'd could imagine.
Posted by Adam at 5:00 PM

Usually if I'm at home, that's what I'll do. But if I'm already out and about, the phone is easier than trying to do a mobile one

Thats sad. However, Moms usually know how to handle these situations.
Lisa

Caregivers like the Mom in this situation have their hands full.

I am sure the mom would have gotten the situation under control before the police needed to be called. If the police were called every time we didn't like how someone was parenting their child, they would never make it to real emergencies.

How very sad. I've observed many parents over the years dealing with handicapped children, young and old. My heart goes out to them, because it is very hard; and as long as they are alive they will care for and worry about their child. The mother may have been at her wits' end.