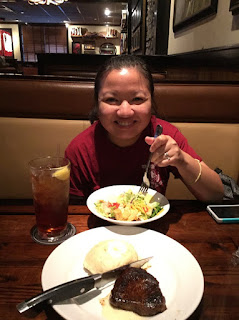 I took Daisy to her favorite restaurant Longhorn Steakhouse before going to out to bowl. She had salad, steak, and mash potatoes. 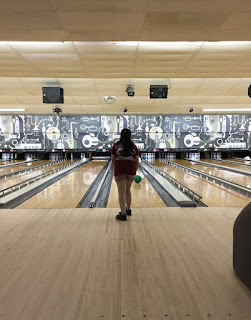 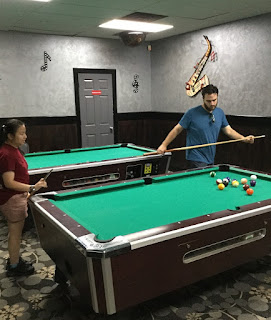 You and Daisy are always out and about:)

Wish I was close enough to come and play pool with you guys! I'd pass on the bowling though because I'm the Queen of Gutter Balls.

Sounds fun. We went bowling today too and ate afterwards. : )

I was never very good at billiards. Probably because there's math (geometry) involved and I was never good at math.

Now that sounds like a fun outing! My brother is an avid bowler. Once a few years ago, we went bowling with him. I did really well and was so sore for days after, I couldn't believe it. Haven't gone since. Now, billiards. That may be less physically taxing!

What a fun evening! I haven't bowled in ages. I learned candlepins bowling in Canada, and have never been comfortable using American bowling balls with finger holes drilled in them. I'm always afraid my fingers will get stuck and pulled off. Irrational, I know, but the worry impacts my score.