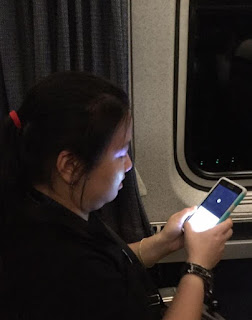 We had no issues with our Amtrak ride to Atlanta, it was only five minutes late getting to Spartanburg from Charlotte. But at the Atlanta station, we were there for like three hours because the train kept getting delayed. Turns out, some CSX train or something like that broke down in front of it just mere miles from the station in Atlanta. The train was suppose to be there around 7pm to 8pm but we didn't get on it until a little before midnight. I didn't get to our actual house until about 4am. Apparently this happens more often than you'd think, I looked up delays out of curiosity and two days later there was a eight hour delay for the same train. I wouldn't have minded so much if we had a place to sleep, but even on the train I couldn't sleep. I was never so glad to be home.
Posted by Adam at 5:00 PM

Glad you and Daisy made it home, nothing like sleeping in your own bed.

These things happen, Adam.
Roads, rail and up in the air!
Just grin and bear it.
Colin

I bet your own bed felt wonderful that night.

These are the 'joys' of travel!

It is nice to travel, but no place like home.

Train delays can be a nightmare indeed. Greetings to you!

Ouch! That's the hard part of travel, but you sure did have a great trip!

There is nothing more miserable than travel delays at night. Nowadays it seems like travelers are treated worse than cattle. I'm sure that home looked very, very good!