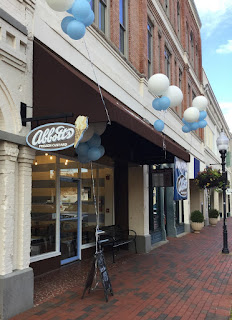 About the time I started dating Daisy (which was in the recovering days of the Great Recession) a lot of local ice cream places folded like Baskin Robbins and Marble Slab Creamery especially when a few Frozen Yogurt places started to appear. Spartanburg is starting to come back with more ice cream places and we heard about Abott's Frozen Custard which just opened this previous Friday I think. I don't know what makes custard so different from regular ice cream but hey whatever. 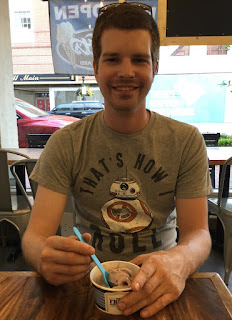 Now the place has a rather small collection of ice cream...custard flavors. You basically got your basics, but I did get the more "odd" Black Raspberry. I asked for a small cup and it wasn't filled all the way in. Then I saw them erase Black Raspberry from the chart and put two-and-two together and realized I got the last of it. While the black raspberry is one of the best desserts I've had in quite some time, I did think it wasn't very cool for the girl to short me like that and not expect I wouldn't notice. Things happen, but c'mon. 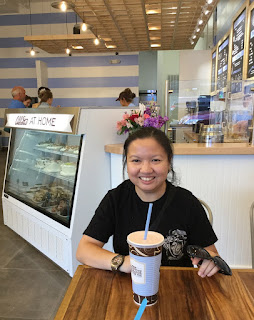 Daisy opted for the strawberry milkshake and we both kind of shared each so we could sample both things. I liked the milkshake but it's certainly not a thick milkshake. It tastes really good at first, but the flavor does die a little when it melts in the summer sun. When we come back I'll stick to the custard.
Posted by Adam at 5:00 PM

Frozen custard, ice cream, I love them both!!
I prefer the thinner milkshakes.

Perfect for summer. I love blackberries.

That's easy!
Custard is...uh...um...huh.
You know? I DON'T know the difference.
This looks like a job for Google!

I don't know what frozen custard is.

First I hear of frozen custard. But it sounds good.

Black raspberry does sound like a tasty custard flavor!

The girl could've offered a different flavour to top up ur order!

I do like ice cream and the custard sounds good too, I'm not beyond mixing flavors and agree with Emmy, they could have offered a different flavor to go along with your short order.

I'm with Jimmy and Emmy! Frozen custard, frozen yogurt, frozen ice-cream, I love them all!