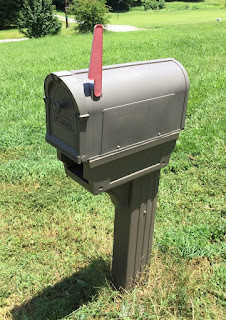 While it was in fairly decent shape, I just didn't like the look of our mailbox. The color doesn't look too bad in the picture, but up close the sun started to get into some spots on the finish. I also disliked how pink the "red" flag was. Most people don't realize that red will fade faster than almost any other color though yellow and orange aren't far behind. So the night before I took some Simple Green and cleaned off any dirt and whatnot on it. 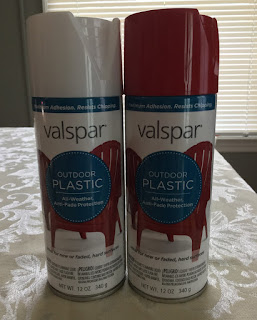 It's a hard plastic mailbox and plastic can be tricky for paint to bond to. I decided to try the Valspar Outdoor Plastic Spray Paint with the simple color names White and Red. They're suppose to bond to any kind of plastic not matter how slick without a primer. 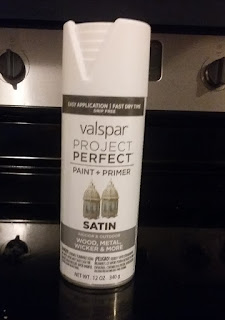 I had plenty of red (just the flag) but I did run out of white for a true second coat. Since I had a good coat on there that bonded to the surface, I did have a can of Valspar Project Perfect in Satin White in storage. I gave it a try and it covered pretty well for the 2nd coat especially over the darker color that was on there before. 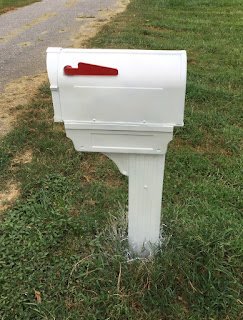 And here is what it was like when it was all done with. The hardest part was trying to keep red off the box and white off the flag. I wish it would of been as simple as taking it off with a screwdriver and putting it back on. I chose white as the color as it reflects light and heat (summer can be brutal here) and you can see it a lot easier when it gets dark. I don't want no idiot running over it by accident on a late night/early morning drive.
Posted by Adam at 5:00 PM

Looks very nice. You need to come and do a makeover of mine.

Your mailbox is in much better shape than ours. Good job!

You're turning into quite the home owner.

See if you can stuff Anthony Scaramucci into it and then nail up
the lid!
Colin

What a difference. I like it much better. Well done.

A nice improvement, Adam! You're someone who likes to do things well.

Beautiful! Now you have to sit write down and write yourself a letter... and make believe it came from me.

need to put a big texas start in the middle of it..haha

You did a good job. I like how bright and clean it looks now.

i really likes your blog and You have shared the whole concept really well. and Very beautifully soulful read! thanks for sharing.
ตารางคะแนน