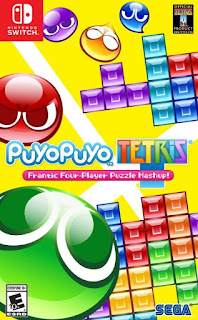 When I was a kid, one of the systems we played the most was the Sega Genesis (Sega Mega-Drive to my European friends) and we had Dr. Robotnik's Mean Bean Machine which was a Sonic themed version of Puyo Puyo also known as Puyo Pop in America. I honestly didn't like the game very much but I love Tetris. With the new release of the Nintendo Switch, Puyo Puyo Tetris (also out on PS4) attempts to fuse the two puzzle games together. I was a bit skeptical but with such few games on the Switch (as it is a brand new console) at the moment I figured I'd give it a try. I know I love Tetris, but can I also like Puyo Puyo? 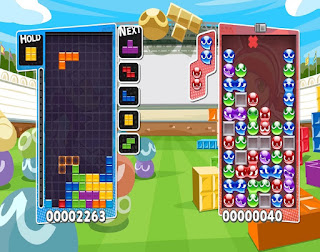 Now Puyo Puyo Tetris isn't a strict fusion of the two classic puzzle games depending on which mode you pick. You can play straight-up Tetris or Puyo Puyo if you so desire just like back in the day. There's also an adventure mode which gives you small missions and challenges though you eventually have to be good at both games. There's also characters and story that goes along with it but I never really cared for that at all. 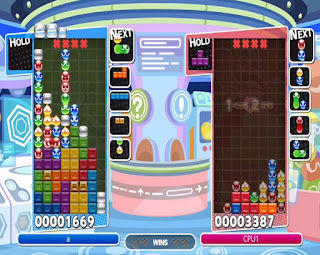 The fusion aspects are in two modes. One has you switching back and forth between a Tetris game and a Puyo Puyo game all lasting far less under a minute before cycling again. The trick is you return where you were when it switched so you have to somewhat remember your strategy from a minute prior. The other is the true fusion mode which combines puyo puyo blobs and tetromino squares on one screen. You can also play online against people all over the world. 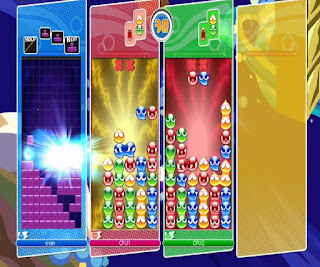 Overall I was a bit disappointed with Puyo Puyo Tetris. I like Puyo Puyo only slightly more than I used to, but I have played Tetris to death so there isn't much thrill for me here. I also wasn't a big fan of the online community as some of the other players are extremely good at Tetris and will dominate the game if you aren't careful. I didn't say Puyo Puyo because almost everyone chooses Tetris if the option is there. The Tetris bias among players is so crazy that it's a bit ironic since this game was suppose to cater to two separate fanbases. I also thought the fusion modes weren't really that fun.  That being said, I still had fun with it, and I still think it's a good game.

Not perfect but fun nevertheless. Score: B... I agree.

Your reviews of games give me a glimpse into a world I don't know. I did play Tetris years ago on a pre-Mac Apple computer. I hope that you and Daisy are having a good weekend!

Caught up! Yay! You are so prolific, Adam, and I truly enjoy your posts!