Question: Do You Think Anyone Wants to Be Royal? 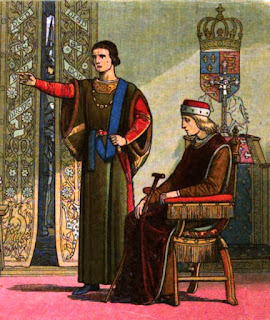 I read a recent interview done by Great Britain's Prince Harry where he says nobody in the British royal family actually wants to be royal. My first thought goes back into history with things like the War of the Roses and the Tudor days where cousins were literally murdering each other over the throne. I can sympathize a little for Prince Harry as he never knew what it was like to be normal. But he also never knew what it's like to be poor either.

Do you think most royals take their jobs out of regret?
Posted by Adam at 12:00 PM

Knowing what it's like to be poor and having to struggle just to make ends meet, I think I would appreciate being a royal or rich a little more than someone who never knew what it was like.

I know I sure would NOT want to be royal.
I think most of the royals are happy with their role and then others probably hate it. Just depends on the person.

I don't think most royals regret being royal. Most of them have few duties and only one or two will ever rule.

If they don't appreciate being royal maybe they don't realize how most of the world lives.

I imagine that having so many responsibilities without the opportunity to live your own life, and the lack of privacy, probably could cause some regret. But I also imagine that they are used to certain comforts, as well.

Being in the public eye at all times would be too much for me. I guess it all depends on the individual. I imagine some don't like it and others don't mind.

sigh*..I call bullshit..he THINKS he doesn't want to be royal..first time he has to stand in line, not get preferential treatment..get his Royalty money taken away and have to get a job(what would he be qualified to do?) he'd be hollering uncle..

Many royals are born into their "jobs." I think highly of the younger Royals who are doing their best to reach out to and advocate for regular people, especially those who struggle with handicaps (like injured warriors) or mental illnesses. I think Queen Elizabeth has done an exemplary job, and I remember the gratitude of my parents and older generations for the brave service and example of George VI and his family during WWII. Whatever you are dealt in life, you have to chose how to make the best of it and contribute to this world.