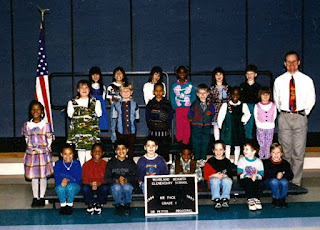 I actually had my first crush in elementary school in Kindergarten I believe. Her name was Raine and she remained in our school for a few years before moving off to wherever. She is on the top row at the very far left in this photo, and I'm on the bottom right row just one before the last person on the right. Some people think we don't know these kind of feelings before puberty but they were true feelings for me. Like the rest of my school crushes, I was very shy and never really tried anything. I do find it a little funny that she was Asian, because when you're a kid you often don't understand the concept of race. But I've always had a preference for Asian women, and I even carried that trait when I was little. With a very low population of Asian people in our area (especially in the early 90's), Raine could of very well been the first person of Asian descent I've ever met and I thought she was beautiful.

My first crush was a girl named Diane in first grade.

Dicky, the boy next door, was my first crush. Blonde, blue-eyes, sweet smile. I was 3 or 4. Like you, I must have a preference. The Husband's nickname is the same, has blue eyes and a sweet smile, and still has some blonde hair.

That's sweet. I had a crush on two boys in my elementary class. They both liked me as well so we just all hung out and when my grandpa would ask me if I had a boyfriend I would tell him I had two. I didn't understand why everyone thought it was so funny until I was older.

I was in love with my second grade teacher.

My first crush was a boy named Michael in first grade. I wrote about it here:
Hometown Memories: My First Crush

Annette Funicello, the Mickey Mouse Club. I dreamt about her.

Cute. I honestly don't remember my first crush but had lots once I reached middle school!!

My first crush was in second grade. Don't remember his name, but he played the prince in the school play of Sleeping Beauty. He was a year older than me.

I can see what a cutie she was and so were you. I didn't get any crushes until college except for popular singers like Johnny Crawford.

I had a crush on my "Uncle" (he was really my cousin) Kelsey. I followed him everywhere when I was a toddler and young girl. Maybe "crush" is the wrong word, but I adored and admired him.