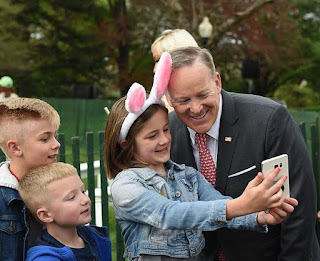 Pretty much half-a-year in, White House Press Secretary Sean Spicer has resigned after being absent a lot and filled in often by his now-replacement Sarah Huckabee Sanders. It might be hard for some people to say if Sean Spicer was just a bad apple or just a perfect mirroring of the horrible shape of the Trump administration. It's very rare to see someone of any trade fail miserably at their job literally minutes into it. Press Secretaries should be calm and collective, they shouldn't get extremely angry and blame the free-press as the enemy of the American people. I've seen Sarah Hucakbee Sanders at her post, and she ain't that much better.
Posted by Adam at 4:30 PM

Being the press secretary for the Trump Administration is a thankless, no-win job and I'm sure he's glad to be done with it. Any sane person would be.

Sean probably isn't a terrible person, but when you have a megalomania for a boss who insists you lie----

A thankless job for sure, I don't think he was really cut out for it...but also don't think anyone will be able to handle it with what they are up against.

I can't wait to see what Melissa McCarthy will do

I loved his replacement in the West Wing Communications "office of nonsense" wish this incompetent "all the best and hope he makes LOTS OF MONEY".
What a collection of clowns all dancing to the Turnip Top Brass Band!
Good riddance.
Colin

I'm surprised he even lasted this long.

I often wondered what Sean Spicer thought of himself as he shaved in the morning and saw himself in the mirror. I couldn't have looked myself in the eye. that said, I will miss Spicy and his contorted antics.