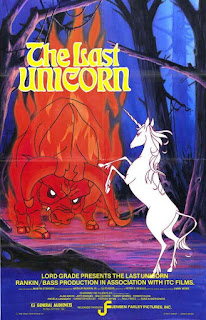 The Last Unicorn is a film I came upon by chance. I'm a big fan of Jeff Bridges, and I heard about this film because he voices a fairly important character in it along with the awesome Christopher Lee. That being said, I was never a big fan of the whole unicorn thing, and as a realist I know they are pure myth now and back in the ancient days. The film is actually based on a popular book of the same name from 1968 by Peter S. Beagle. I also learned that it was produced by the animators Rankin/Bass who I liked best for Rudolph the Red-Nosed Reindeer and Frosty the Snowman. It was actually animated however by the Japanese studio Topcraft which eventually became Studio Ghibli that produced later movies like Spirited Away, Ponyo, and Arrietty. It has a quite the pedigree, but was there a good reason why I never heard of the film until almost forty years after the fact? 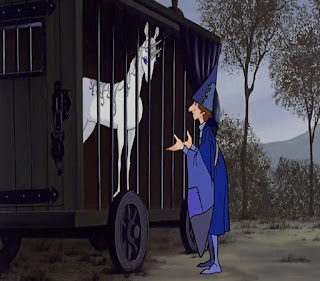 The story is about the nameless Unicorn who overhears someone mention she is the last of her kind. The so-called last unicorn is in denial for a bit, but the fear gets to her. She decides to leave the safety of her forest and seek out the rest of her immortal (to age) kind. However the rest of the world can be a cruel place. She takes a nap on the side of the road which gets her captured by the witch Mommy Fortuna who runs a carnival for mythical animals most of which are just made to look like beasts due to weak magic. However one of the carnival's workers is a terrible magician named Schmendrick and he pities the young unicorn and helps set her free. 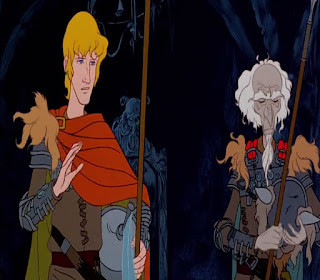 The two travel and end up getting into more trouble along the way. The unicorn believes her kind are being held captive by the legendary Red Bull. Her weak sorcerer friend is a little skeptical if this so called Red Bull is even real or not. They are clued in that the Red Bull lies in the kingdom of King Haggard. Once they meet the depressive King Haggard and  his valiant son Prince Lir, things get far more interesting. It's going to take a lot of courage, wisdom, hope, and magic to uncover what happened to the rest of the unicorns. 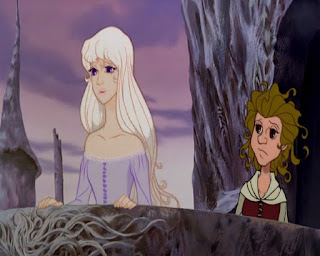 Overall I was actually really pleased with The Last Unicorn. The animation holds up fairly well for its age, and the story isn't changed much from the book from what I hear. I did think it was curious on how much the character Lady Amalthea looks like the book-version of the Game of Throne's character Daenerys Targaryen and she even has the same purple eyes. I'm not sure if George R.R. Martin was inspired by her, or if it was just a coincidence. But anyways, I guess time itself was to blame for the reason I missed out on it for so long.

I don't think I've seen this movie before. I'll see if I can find a stream somewhere. So interesting that Amalthea does look like Daenerys!

I've never heard of this one, but it sounds really unique. Glad you liked it.

This was my favorite movie when I was around 5. I bought it in a clearance bin years later and it became my daughter's favorite for a while there too.