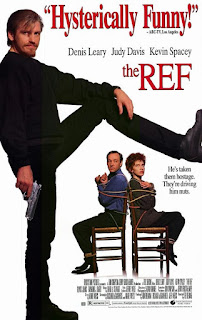 The Ref is well over twenty years old now, and it's been on my "to-watch" list for quite some time. I was never a big fan of Denis Leary (but I've never hated him either) but I really like Kevin Spacey especially after House of Cards. The film is probably fairly forgotten as I don't really hear anyone ever talking about it. Back in the mid-90's, it did rather poor at the box office so it was never a great success there either. But critics were mostly pleased, and so were regular folks. Were they right about this one? 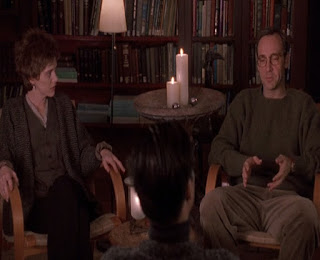 The film begins right near Christmas with a couple named Lloyd and Caroline Chasseur going through a bitter marriage but Lloyd (for almost reasons unknown) does not want a divorce. Caroline cheated on Lloyd but that's not the worst part of their marriage. Their both in debt to his mother, and Caroline just doesn't feel very happy. They do both bicker and verbally fight until the sunsets, so the deep passionate anger is in both of them. They try to go through a marriage counselor, but even that goes very poorly. Even their son is not very right, and while Caroline defends her son even Lloyd thinks the teenage boy is trouble. 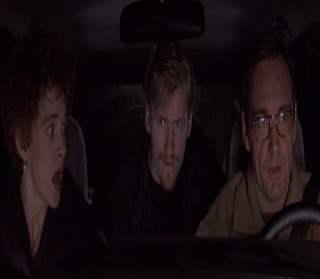 However a criminal named Gus gets stuck in a unfortunate situation and tries to hide. He sneaks up on Caroline and forces her to take him to their house. Gus didn't know about Lloyd but has no other choice but to put up with him as well. While the married couple is in a situation that would make many tremble in fear, they still fight which annoys Gus to no end. Sadly for Gus is that their family is coming over for Christmas Eve dinner and there's no way to cancel on them. Will Lloyd and Caroline be able to make it see Christmas morning? 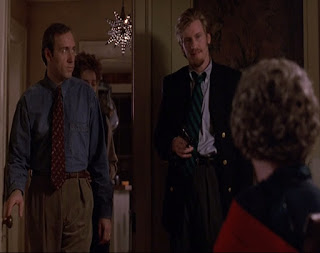 Overall The Ref was a pretty funny movie. Even though the movie is fairly old, it does age pretty well at least. Both Denis Leary, Kevin Spacey, and Judy Davis all work well and have pretty good chemistry between their characters. Denis Leary was bitter on how well the movie did at the box office, and maybe some of the blame would fall on the movie company as this Christmas movie came out in March for some reason. I also noticed the future Oscar-winner J.K. Simmons (most would remember him best as J. Jonah Jameson in the original Spider-Man movies) in the film and this was actually his first movie role.

I remember seeing this quite some time ago, and wasn't sure what to expect. Once I actually watched it, thought it was really good.

I think I enjoyed this one, but it was a long time ago when I saw it.

Interesting, I love movies and I've never heard about this one before - I shall give it a try if I come across it! Thank you for stopping by my blog :)

I remember enjoying this one when it came out originally. Haven't seen it since though. I do enjoy a good pair of Bickersons, so long as it isn't My Rare One and me.

I know that I watched this one, don't remember anything bad about it.

Haven't seen this movie, Adam. Probably won't. Right now Terry and I are binge watching "Orphan Black." OMG, we are loving it. We had dinner and drinks with friends tonight. They saw the first episode of "Orphan Black" and didn't like it at all. It's all about personal taste. Hope you and Daisy are starting off on a great weekend!