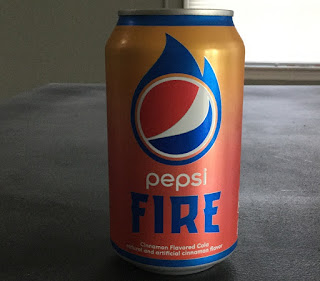 Pepsi Fire seems to be the newest fad flavor to come out of the Pepsi line. My wife got a 12 pack awhile ago and I tried it. Kind of tastes like Pepsi mixed with Big Red gum as it's suppose to have a cinnamon flavor to it. It also wasn't nearly as hot as people were saying, but then again we drank it cold. That being said, I liked it to the point where it was okay but I prefer the regular version. My wife liked it more than I did.
Posted by Adam at 12:00 PM

I haven't had it but a couple of fb friends tried it and said it wasn't worth trying.

Not sure if I would like it..most likely would :)

I used to like Big Red gum back in the day I could tolerate such things. Now my system can't even tolerate cola, let alone a strongly flavoured cola like this. Don't get old, Adam.

Oh wow I have never seen this before! SO interesting.

I've not heard of it before either.

I've never even heard of this flavour!

Tried a sample of it at the grocery store and thought it was horrible.