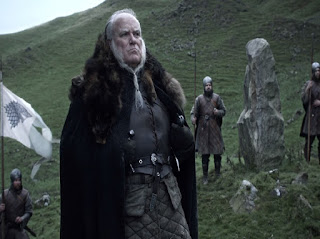 Rodrik Cassel might of not be the most memorable character in the first two seasons, but he was one of the most important non-Starks at Winterfell. He was the master-at-arms at Winterfell and he trained two generations of Stark children how to fight including non-Starks like Jon Snow and Theon Greyjoy. Like the rest of his family, he was very loyal to the Starks. 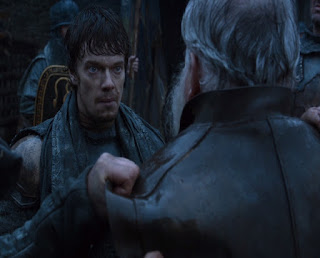 Unlike Theon Greyjoy who turns on the Starks after a spat with his Iron Island King of a father. The loyal Ser Rodrik is captured by Theon and is killed by him after a public display of disrespect. In the book it's different, as Rodrik was at odds with Theon but was killed in a sneaky plan by Ramsay Snow/Bolton. I assume the show changed it to make the Ramsay shocker a surprise. 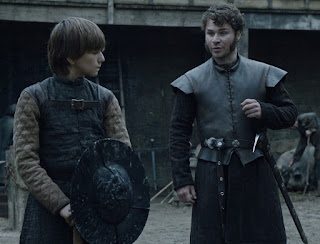 You also get to see a much younger Rodrik in one of Bran's visions overseeing a training duel between Ned Stark and his brother Benjen Stark.
Posted by Adam at 12:00 PM

I tried watching the show when I had a free HBO weekend. I found it boring.

I've watched the entire series twice and there's still much I didn't follow.

I really like this show. I'd watch it all over again from the beginning.

I want to watch the entire show all over again..

I love the books and I love the HBO series. I hope to read them all again and watch the series again!