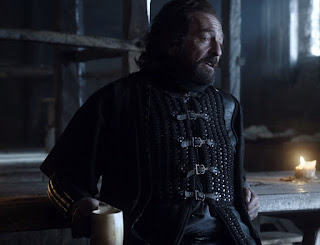 I think many fans probably forgot about ol' Yoren here. You almost don't notice him much at first. He's a recruiter for the Night's Watch and good friends with Benjen Stark. 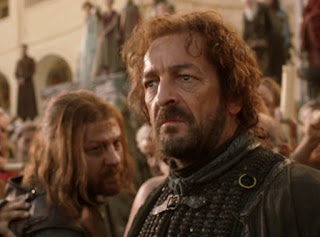 He was in King's Landing on business when Ned Stark lost his head. Eddard gave Yoren the clue he needed to find Arya Stark which he soon protects. He makes her look like a boy and makes it seem like she's a recruit for the Night's Watch until they reach Winterfell. 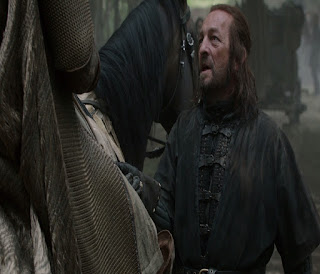 Sadly for Yoren, he dies after Lannister soldiers get revenge after he failed to give up Robert Baratheon's bastard son Gendry. I think it's funny they'd care so much to get Gendry, if he had joined the Night's Watch he'd literally have no case to be King anyway. And for Arya Stark, it's a good thing for her that the event did happen as she'd either end up at the Red Wedding or a victim of Ramsay Bolton if the original plan went smoothly.
Posted by Adam at 12:00 PM

I'll be waiting tonight for the beginning of Season Seven.

I do remember him!

Arya is one of the most fascinating characters in GOT ~ right up there with Daenerys and Tyrion. I wouldn't be surprised to see her win the iron throne. I wonder if she can change into a dragon???