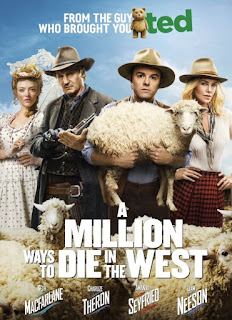 A Million Ways to Die in the West is a movie that got me hopeful a few years back. It had Seth MacFarlane of Family Guy and Ted fame. But most of his fans actually have never seen him in a starring role that wasn't just his voice-only. It has an impressive cast especially with personal favorites of mine like Liam Neeson, Charlize Theron, Amanda Seyfried, and many others in cameo roles. However the sad part about the movie is that critical opinion was unkind to put it in nice terms. Granted most films that try to cram in as many celebrities as possible tend stink fairly bad. Was A Million Ways to Die in the West really that bad or did it get unfair treatment? 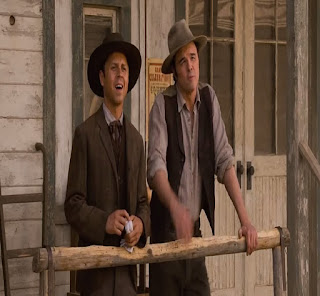 The movie is about a man stuck in the wrong time period. His name is Albert Stark who lives in the Arizona territory in 1882. Albert isn't like many in his town. He's intelligent, kind, and not much for the life of the Wild Wild West. Albert Stark gets challenged to a duel with pistols, and chickens out of the fight. This causes his beautiful girlfriend Louise to break up with him and find someone else in the town. This causes Albert Stark to become even more bitter about life in his Arizona town and he hopes to make it to California. 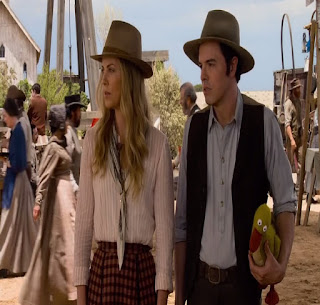 However before he can pack his bags for a more civilized part of America, he meets the gorgeous and charming Anna Barnes. She really seems to like Albert Stark, and the two are quite the duo together, regardless if they are romantic or platonic. Anna Barnes makes Albert Stark's girlfriend have second thoughts about the break-up which pleases Albert Stark. However as he starts to fall for Anna, there's one problem. She's really Anna Barnes-Leatherwood, and her husband is the notorious bandit Clinch Leatherwood. She doesn't like her husband very much, and spent quite some time away from him as he went out causing havoc. However when he returns to find his wife, he might not be too pleased to meet Albert Stark. 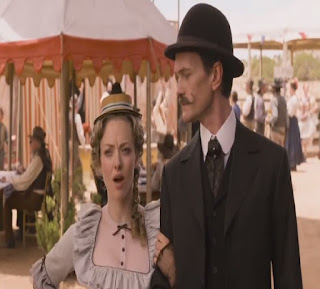 Overall A Million Ways to Die in the West was a little better than I had expected. It's a bit of a shame really the movie didn't really work out. A lot of jokes I don't have any doubts were written by Seth MacFarlane but a lot of them fall flat. Sometimes it doesn't feel cheesy or dumb, but they seem to be delivered as badly as if they had been told by a new stand-up comedian. Also the movie drags on and it's strange to see a comedy hit the two hour mark. I will say I really liked Charlize Theron in this movie as her character Anna Barnes-Leatherwood is just so likable, it's too bad she can't hold up a sinking ship.

Thanks for the review!

glad I skipped this one

I never watched this one.

I was thinking to find a movie to watch but maybe not this one! Thanks for the review.

Have just finished watching a golden oldie Western Movie.
"The Cowboys" - now this should be watched and especially the
bonus features at the end of the movie.
John Wayne reportedly said it was the best and most satisfying
movie he ever made.
Thank God it was made before "political correctness" was thought of.
The boys in the movie are unbelievably talented.
Cheers
Colin

I paid good money to see that piece of crap!

Another one I haven't seen.

I have to admit...I like this one and laughed out loud more than once. It is not great and it's low comedy but I laughed

I have been tiny bit familiar of this your broadcast provided bright clear concept...
ดูหนังออนไลน์

Thanks, Adam! I'll avoid this one!

I saw that movie and I loved it..and fell in love with seth..