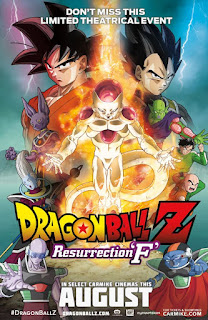 Dragon Ball Z: Resurrection 'F' came out in Japan in 2015, and I'm guessing 2016 for America. I just recently saw the movie Dragon Ball Z: Battle of Gods not that long ago, and I noticed that both of these films' stories got fused into the story of the new series Dragon Ball Super which I haven't seen but heard about. I actually liked Battle of Gods a lot, and while I'm a big Dragon Ball Z nerd, I was never such a big fan of the movies overall. A lot of them had stupid villains, unbalanced powers, and a plot that made no sense to the main time-line. For many fans though, Frieza was the most epic villain of the whole series, so a movie about his return is certainly something that would raise the eyebrows of anyone who remembered his battles against the mighty Super Saiyans Goku and Future Trunks. 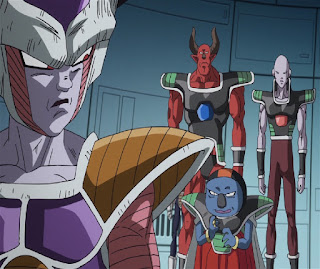 The film is set after the death of Kid Buu, and Goku's battle against Beerus the God of Destruction. Some of Frieza's old men are led by a former minion named Sorbet all of whom track down Earth's dragon balls. Using Emperor Pilaf, Mai, and Shu as pawns, they summon Shenron and use the wish to bring Lord Freiza back to life. They inform Frieza of Goku's experiences fighting Cell and Majin Buu, and Goku's nemesis realizes he must train if he even wants to think about challenging the "monkey" ever again. 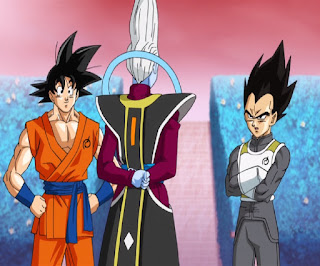 Goku and Vegeta however are not on Earth, but rather training with Whis (while Beerus is in his slumber) on the strange deity planet. The two Saiyans are thinking about nothing but getting as strong as the cat-god. However Frieza lands on Earth while they are light-years away. Freiza has gotten stronger in a short time, and Piccolo, Android 18, and even Gohan now don't rival his strength. The alien warlord has new tricks up his sleeve. And it will obviously be up to Earth's greatest champion to save the day or perish trying. Overall the new Freiza movie was a little worse than I expected. I think the reason why is that it falls into the pit of bad-writing like many movies based on Dragon Ball Z, such as stupid imbalances of powers, badly explained new feats of strength, and an ending that's a bit meh. I still liked it to be fair, and I will most likely watch Dragon Ball Super once the English dub finalizes so we will see how this plot morphs into a longer story-arch.

I love dragon ball too but I don't think I've ever seen this one !
TheNotSoGirlyGirl // Instagram // Facebook

I always enjoy your thorough review, Adam, even if I'm not likely to see the movies.