Fact of the Day: Catholic Country 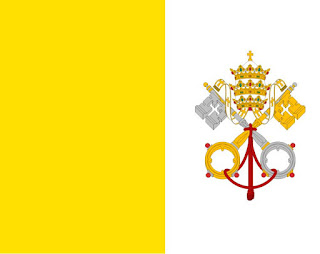 Starting in 754, the Papal States existed until the unification of Italy in 1870. In their prime, the Papal States comprised of a good chunk of central Italy all of which was ruled directly by The Pope. Italy officially gave sovereign land (Vatican City) to The Pope in 1929 creating the quasi nation-state known officially as the Holy See.
Posted by Adam at 9:25 AM

Email ThisBlogThis!Share to TwitterShare to FacebookShare to Pinterest
Labels: Catholic, Christianity, fact of the day, Italy

I visited Vatican City in the summer of 2016 ~ only scratching the surface of course! Very imposing and beautiful. But somehow this morning it made me think of ISIS and its desire to establish a Caliphate. I looked "caliphate" up and the original one was established in 632. Some of the parallels are fascinating! Have a good one, Adam!

That I did know. Minus the specifics.

It's an interesting place.

Vatican City is one of the most impressive places on Earth.
Going to Mass in the Basilica is a must. The ritual and pageantry
are something to behold.......even for Non-Catholics.

It still is a state with diplomats and the Papal envoy to many countries is the "Dean of the Diplomatic Corp" of that country!!!

Vatican City is not only the smallest country in the world, it also has the lowest birth rate.