Fact of the Day: Elizabeth Barton 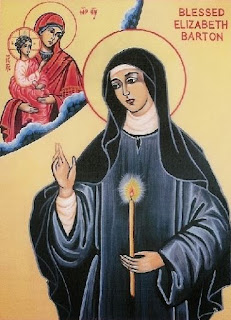 Elizabeth Barton was a English nun who became a celebrity for her time after she allegedly made prophecies that came true after recovering from a terrible illness. When King Henry VIII wanted to separate from the Catholic Church, Barton tried to stop it and predicted Henry would of died within months if he had done so. Due to her popularity, Henry let her go unpunished for almost a year, but his people did spread rumors about her like being the mistress of several priests, and that she was mentally ill. She was eventually executed on Henry VIII's orders, and Henry himself lived about 15 years after her prediction of his doom.
Posted by Adam at 12:00 AM

Email ThisBlogThis!Share to TwitterShare to FacebookShare to Pinterest
Labels: fact of the day, King Henry VIII

He was quick with having people killed!

Henry didn't suffer anyone to stand between him and what he wanted.

One way to prove her wrong

Not the nicest guy.

A time of utter madness in the name of religion.
Take note "bible bashers" - your day will come,
especially the Evangelical mob of Texas, Tennessee, Alabama
and God forbid, Mississippi.
Colin
Colin

Wow, that is really something else, I bet she was excited.