Fact of the Day: Literal Half Moon 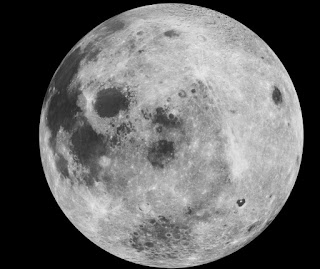 While many supernatural things in the Quran also occur in The Bible (as both have many of the same stories and characters such as Noah and his ark), a supernatural act purely in the Quran but not The Bible is the splitting of the moon as it's a "miracle" attributed to the Prophet Muhammad. Muslims who believe the story to be literal, point to the moon depression Rima Ariadaeus as "proof" of it happening. NASA scientists completely reject the idea, and no other country/culture at the time of Muhammad's lifetime recorded seeing the moon in two pieces.
Posted by Adam at 12:00 AM

Email ThisBlogThis!Share to TwitterShare to FacebookShare to Pinterest
Labels: Christianity, fact of the day, islam, NASA

I never knew this. Fascinating that there's no similar story in other religions. Then it MUST be true...

Riiigghhht. Did it by blinking at it.

This is a new one for me. I'm going to have to look into it!

Religions are based on collective stories accumulated over
centuries and should never be taken literally..