Fact of the Day: McCain POW 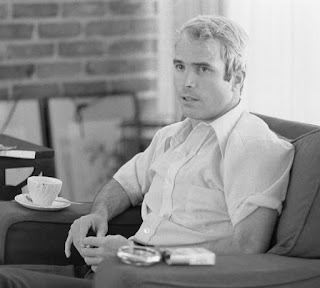 When Senator John McCain served during the Vietnam War, he was captured by the North Vietnamese. It didn't take long for them to discover that he was the son of a high-ranking admiral, and offered to let him go as it was good propaganda for their side. McCain refused to be released until the other men before him were let go as well which subjected McCain to years of torture in the POW camp.
Posted by Adam at 12:00 AM

A politician with a backbone, rare indeed.

People might not agree with things that McCain does/did, but man....this part of his background really makes him a true soldier to my eyes.

Wow what an impressive man, what character. Even today, sick with brain cancer and still fighting for America.

That is very impressive!

No one can say he was a coward except a true idiot. I may not agree with his politics but I think he is one brave man

A truly great friend of Australia.
Prior to his recent operation, he visited Canberra and addressed
many organisations mainly to assure us and the rest of SE Asia that the US was still our friend.......more of less putting Turnip Top in his place.
Senator McCain was honoured by being allowed to sit on the floor of the Australian Federal House of Representatives (US - Congress), something only given to CERTAIN friendly Heads of State!
You people who seem to disapprove of him should remember his time as a P.O.W in the notorious Hanoi Hilton and then recall the tweet outburst by Trump that McCain was not a hero as he was captured!
Disgusting, disgraceful and deplorable!

Such a pity of sorts that he had a "Hanoi Hilton" nightmare and selected that disgusting "Tea Party", Sarah Palin as a running mate. He could have selected Stalin........Stalin certainly knew more than that Moose Shootin' Twit!
Colin

I've really been impressed with how he stood up to Trump and the Republican party. I do think he's got the country's welfare at heart.

I don't always agree with McCain and certainly didn't vote for him when he was running for president, but there is a great deal that I admire about him.