Fact of the Day: Puyi's Color 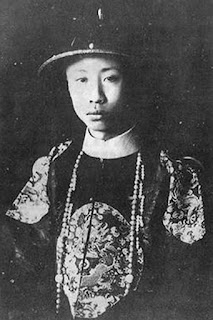 While monarchs typically got better educations than their subjects, in the case of China's last emperor Puyi that was not exactly the case. When he was 13, he knew almost nothing of math, science, or even where Beijing was located the world. He reunited with one of his brothers but became angry after he saw him wearing yellow. Puyi believed only the Emperor could wear yellow, but had to be corrected because any member of the Qing family could also wear it.
Posted by Adam at 12:00 AM

Email ThisBlogThis!Share to TwitterShare to FacebookShare to Pinterest
Labels: china, fact of the day

Must have thought he knew it all, typical teenager

I love that you find all these unusual facts!

Such interesting bits of information!

I bet his brother wore only yellow to annoy him from then on. Even though it was allowed. I like all these random facts!

This is really interesting! Thanks for sharing this.

I learned about this fellow from the movie "The Last Emperor."

What a strange and sad life Puyi had ~ which does not excuse his cruelty toward his eunuchs and others.