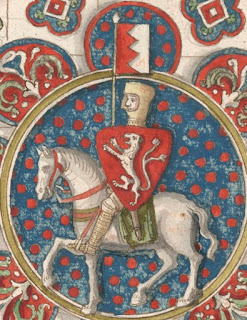 Simon de Montfort was a French nobleman who initially befriended King Henry III in an attempt to reclaim titles and lands taken away from him by Henry's father King John. Simon even married Henry's sister Eleanor and Henry even gave his blessing when all was said and done. However after many feuds with the king, Simon eventually led rebellions against him and calling up what would be England's first real Parliament. For a time, Simon actually held the real power in England instead of Henry III. However Henry's son Edward (the future Edward I) eventually led Henry III's forces to free his father and they were successful at the Battle of Evesham. Simon died on the battlefield, but ironically his future descendants became Kings of England as he was an ancestor to Elizabeth Woodville, who married and had heirs with King Edward IV.
Posted by Adam at 12:00 AM

Simon is my husband Jerry's 22-greats uncle and Edward I his 21-greats grandfather, and so on. Jerry has no titles and no lands. Oh, well.

Quite the power swapping going on through generations

Man....history is definitely much more interesting than fiction sometimes.

PS Gaaaaaah! Jon and Dany...why do they have to be related?!?! I mean, we all know the big reveal was coming, but gaaaaaaaah!

We can learn a lot from history, interesting.

Lots of convoluted history in Britain.


This is a really good idea that you have going on.
ดูหนังออนไลน์

English history is so complicated! Have a great Monday, Adam!

this is my favorite part of english history..right up till Elizabeth1st..after that it was tits up.

Politics and marriage and evil doings...sounds like a Game of Thrones