Fact of the Day: Thomas Becket 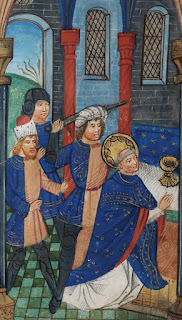 Thomas Becket was an Englishman who was picked by King Henry II to become Archbishop of Canterbury. Henry II was not pleased on how much power the Catholic Church had in his country, and hoped Becket would change that. However Becket sided with the church which made him an enemy to Henry II. Eventually he was murdered by several men who worked for Henry II, and the majority of Europe was shocked and blamed Henry II as a result.
Posted by Adam at 12:00 AM

Talk about irony. This is some great artwork by the way. Hugs...

That sure came back to bite him

Hi! Thanks for your information.

Wow! So much aggression and violence all the time.

"Will no one rid me of this meddlesome priest?" From Henry II to the Mango Mussolini ~ very current ~ Poor Comey!

And they made Becket a saint.

Good one Fundy Blue but I wonder who of the commentators on this blog cottoned onto what you have written??
Colin

So what he stood up for a principle.
Colin

Thanks, Colin! I've been enjoying your recent comments on Adam's posts! Maybe "enjoyment" is the wrong word. The situation with our president is anything but funny or enjoyable!