Fact of the Day: Viking Feminism 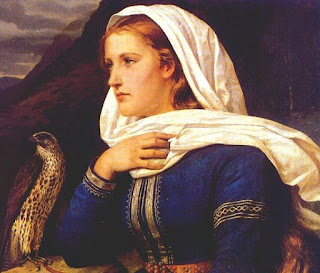 For their time, women in the Viking-age Scandinavian countries typically had far greater liberties than almost any of their counterparts in the world. While they still lived in a male-dominated society, they could have a say in who they would marry, petition for a divorce (with extra rights), and own property.
Posted by Adam at 12:00 AM

Never knew that, too bad it took the rest of the world so long to catch up.

PS Have a wonderful vacay!

Yes, they were in a much better position, comparatively speaking, than their other European female counterparts at that time.

That is pretty cool!

That's interesting. When we hear talk of history, it's rare to hear that it's okay for women to actually initiate a divorce. Hugs...

Cool! We attended the Viking Days events yesterday at the Danish Canadian Museum.
Do you watch the tv show Vikings? I really like it!

I was surprised when I learned this.

And could be warriors too

they were a force until their own selves..

unto their ownselves...crap I can't think..

The Vikings are a fascinating people.