Favorite Quotes: The Truth About the Racist Right-Wing 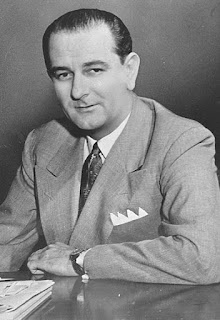 "If you can convince the lowest white man he's better than the best colored man, he won't notice you're picking his pocket. Hell, give him somebody to look down on, and he'll empty his pockets for you."
-Lyndon Baines Johnson

Lyndon Johnson was a very progressive president (domestically, certainly not in the war department) but as a U.S. senator he often led the conservative Dixiecrats in racist crusades. I don't know what led to his change-of-heart in policy (his own 1964 Civil Rights Act caused the racist conservatives in the South to switch to the Republican Party) but he certainly knew how the game was played.

The "I'm not racist" neo-confederates often use the line that the rich plantation owners couldn't convince the whole population to fight for their right to have slaves. But if you think about it, these same 21st century Republicans who are often dirt poor and critically uneducated, will fight tooth and nail to insure the rich man has almost no taxes, and they also ensure the unnecessary wealth of the 1% by eroding labor laws and dissolving labor unions.

The right-wing of any country and society will almost always play on the population's xenophobic and bigoted fears to win votes. The quote never became truer than in 2008 when Barack Obama became president. There were countless shoe-less, racist, ignorant, poverty-stricken, and embarrassingly dumb red-necks who thought they were far superior to President Barack Obama in every way. They are all puppets dancing on marionette strings pulled by people like the Koch brothers, Paul Ryan, and now our Cheeto-In-Chief.
Posted by Adam at 12:00 PM

Well done Adam.
LBJ was somewhat of a "juxta-political animal". You nailed it on the
head re: Vietnam............he got himself into quite a confused mess.

I have always held the impression that he knew a little more than ever came to light on the shocking day in November 1963 in that hell hole, called Dallas.
This would have been the day when the likes of your now "prairie hole hidden dowagers" would have been doing cartwheels of delight to get rid of that "PAPIST" Kennedy.
Shame on them and may they rot in the fires of hell.
Colin

You nailed it! I'm so glad you found this quote because it is as true today, unfortunately, as it was back then. Very sad but true

Such an interesting quote! So much truth in what you're writing here. *sigh*

when someone say's I'm not racist..but..I walk away.

The assassination of Kennedy and the swearing in of Johnson is one of the most searing memories in my life. I don't know what brought about his change-of-heart Civil rights Act, but I'm glad he did change in that respect. Cheeto-in-Chief ~ how do you come up with these hilarious names, Adam?