Keeping Up With the Joneses (2016 Film) Review 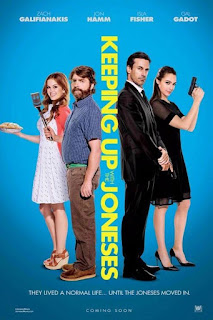 I remember when I saw the trailer for Keeping Up With the Joneses, and I have to admit, I was tempted to see it in theaters but I ended up skipping it until now. The movie seems to hope people will go see it due to the small but notable cast. Gal Gadot is really popular right now due to Wonder Woman, a lot of people love Jon Hamm for Mad Men, Zach Galifianakis is well known for his comedy, and while Isla Fisher might be the least famous of them all she is also married to the much more famous Sacha Baron Cohen. I also noticed (and looked it up to confirm where it was filmed) the film is set in (and around) Atlanta, Georgia which is somewhat close to where I live in Spartanburg, SC and Atlanta is the place where I took my last vacation. 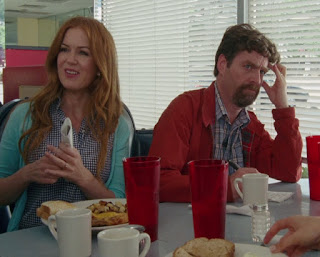 The film starts off with the lives of  Jeff Gaffney and his wife Karen Gaffney. Their kids are away, so they have time to enjoy themselves as a married couple. Jeff works in human resources at McDowell-Burton International which makes high-tech stuff for the government. While Jeff is in the dark about what his company really does, he knows everyone in the company due to being in HR. His job is fairly dull, so Jeff and Karen get excited when a new couple moves in next door. Their realtor tells them that the Jones family didn't even look at the house before they got it. Which makes that fairly odd. 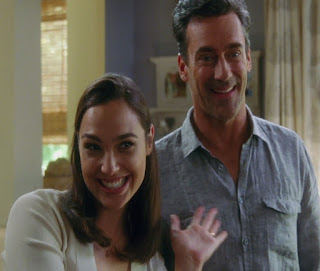 They finally (and awkwardly) meet Tim Jones and his wife Natalie Jones. Tim is apparently a travel journalist and his wife claims she works in social media. However Jeff and Karen have a strange feeling about them. Not only are both incredibly attractive and likable, but they seem to have special skills that typical American couples lack. Such as when Natalie has laser-accurate throwing skills  as she shows when winning the neighborhood dart-throwing contest, and Tim can speak Chinese. Karen and Jeff are going to be a little shocked to find out that the Jones are really spies. But are they on the side of good or allied with the forces of evil? 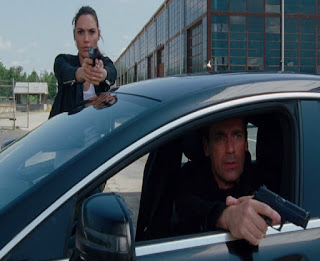 Overall I was pretty disappointed by Keeping Up With the Joneses and I can see why it flopped at the box office and with critics as well. It's a comedy-action-drama and like many movies that try to hybrid genres, it ends up being rather bad at all than being good at one. I will admit the spy scenes are actually pretty cool, and I really do think Gal Gadot ( she is one of my favorites) and Jon Hamm perform strong roles here. It's just the comedy is flat, which is unusual for something with Zach Galifianakis in a lead role. The ending is also much better than the start, but it still doesn't save the film much when all is said and done.

This movie sucks so hard it's almost exciting.

I'm a serious movie fan, and forgot about going to check this out. I also like spy stuff, so I'll probably check it out one day soon. Great review! Hugs...RO

glad i keep passing on watching it.

I never knew that! I guess he wasn't just interested in science then, but the weather as well.