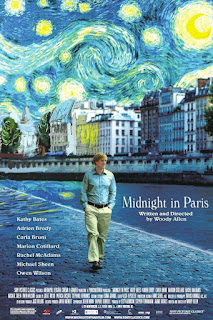 Midnight in Paris is a film I've heard about for several years but never knew much about it. I was even clueless that Owen Wilson was in it. Owen Wilson certainly doesn't seem like the guy you'd expect to see in a movie that would earn so many Oscar nominations. It lost Best Picture but won for Best Original Screenplay. I think the thing that pushed me to see it was that fact that Tom Hiddleston (famous for being Loki in Marvel's Thor/Avengers movies) had a minor role in the film. I also heard it involved time-travel, so there's that. So was Midnight in Paris the big awesome film that really was worthy of those Oscar nominations? 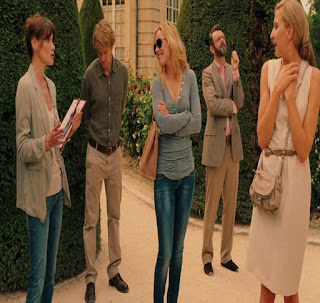 The story is set in the present-day with a Hollywood-turned-legitimate novelist named Gil Pender on vacation with his fiancee Inez in the city of Paris, France. Gil and Inez end up running into her old friend Paul and his wife Carol. Paul is a know-it-all and it gets on Gil's nerves especially when Paul gets things wrong and argues with tour guide on French history. Inez apparently sees no flaws in Paul, and Gil basically estranges a bit and explores Paris which he adores. He wishes he could live back in the "good days" which he would say would have been the 1920's. 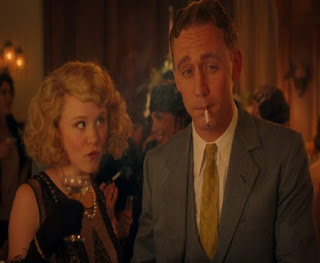 He gets in a car and is amazed to realize that he really is in Paris during the 1920's. He meets legendary greats like F. Scott Fitzgerald along with his infamous wife Zelda. He also gets to befriend one of his heroes Ernest Hemingway who takes a liking to ol' Gil. Among other legends is Gertrude Stein who offers to read Gil's new novel to offer advice. It's hard for Gil to tell if it's reality or a dream he's in. But he does start falling for a French woman named Adriana, and if it is a dream he might not want to wake up. 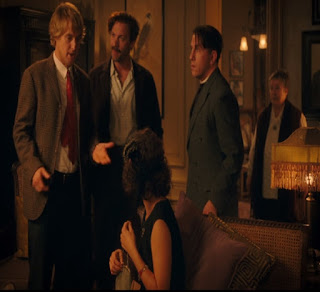 To be honest, I wasn't that impressed with Midnight in Paris. I do like how the actors who portray the legends of the past really do seem to be just like what the actual celebrities were in reality. However I just really disliked Gil, Inez, her parents, and Paul. I also thought it was strange that Gil speaks almost no French (from what I can tell), but luckily manages to get around Paris and succeed there knowing just English. Also the figures of the past, aren't exactly my top picks on who I would like to meet via time-travel as I was never very big into art and classic/early modern literature. But I can see how the "artsy" people at the Oscars must of been excited over this one. To be fair, I think it's a good film, just not a film that would of wowed me to think it deserved something like Best Picture.

I agree with you, Adam. All the modern-day characters were whiny, annoying, unlikable pains in the ass. The reason he encounters Hemingway, Stein, Fitzgerald etc. though is because they all lived in Paris as ex-pats during that era. They were just a few of the literati and artistic stars who lived in Paris then because it was much freer and cheaper than Britain/America.

I enjoyed seeing all the famous celebrities from the "lost Generation, but it was just a so-so movie.

Hmmm never heard of it but I think I'd watch it to see what I think. Thanks for the review!

I've never had the urge to see this film, but now I think I'll look for it at the library. Thanks.

I've got this on my radar in case it comes up for free on my cable service. I loved visiting Paris a few years ago and would go back in a heartbeat. I had been in France in 1972, but only got within 35 kilometers of Paris then. This recent time, I found the French to be really great about trying to communicate with this non-French speaking tourist. Whenever I tried to speak French, the people would take mercy on me and speak in English! LOL