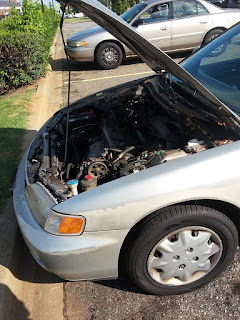 In early August, my wife Daisy mentions that her car didn't want to start before going to work. Luckily her car did start and she made it there without being late. I told her to drive to her dad's after work, assuming she could get the car on again. Her dad said it was probably the battery, I thought it was the starter from the way Daisy started the conversation. But then Daisy's dad checked the battery and got a "good" reading. We took it to Advance Auto Parts and the clerk guy got a similar reading. He offered to charge the old battery for nothing but it would take about another forty minutes to charge. So we go somewhere in my car and come back. 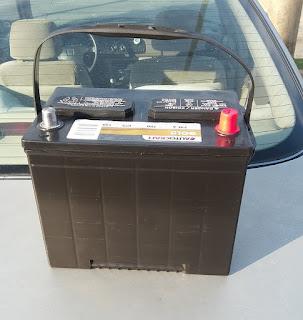 They tested the old battery after the charge and the reader read it as bad. This does sound a little dubious, but her old car battery was at least two years old, but from what I'm guessing 3-5 years is probably the real age. Batteries rarely last longer than that and I did see the meter actually say "bad" on it so I can't say they were lying. I did notice Daisy's battery is bolted on under the hood, and the guys there didn't seem to want to volunteer to remove the old battery or install the new one. I can understand them not offering for the removal because at first we weren't sure if we were going to get a new battery or not. Thankfully Daisy's dad had the tools or else we might of been up the creek without a paddle.
Posted by Adam at 5:00 PM

I'm glad that things worked out safely for Daisy. As a woman, I want to know that my car is running dependably! I'm so glad that I have car repair shop that I know and trust. Have a good one, Adam!

I'm glad things turned out well. Cars are convenient but they can be a pain, too.

A battery is one of the easier car fixes.

Nothing can ruin a day quite like car troubles. Glad her car is back up and running again.

It good you got a new battery, I had one tested and charged at an Auto parts store, it lasted a couple of months before I had to go ahead and replace it.

[video] Dead Simple Trick Brings Any Battery Back To Life

There’s a new way to bring nearly any type of old battery back to life ...so it’s just like new again.

This method works with nearly every type of battery out there ...and it’s simple and quick.

In case you’re wondering, you’ll be able to bring car, phone, and laptop batteries back to life with this.

It even works with solar/off-grid, marine, golf cart, and forklift batteries. Plus, many more!

And this new video presentation shows you how: