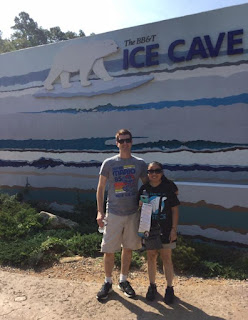 At the NC State Zoo, we found The Ice Cave which is where the polar bear lives. He's got at least three main sections and it took us forever to find him as I think there's only one polar bear there currently. 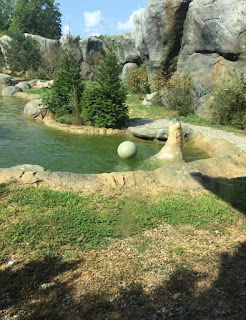 He was over near a section called Piper's Den. It was hot that day and I wasn't surprised he was in the water. 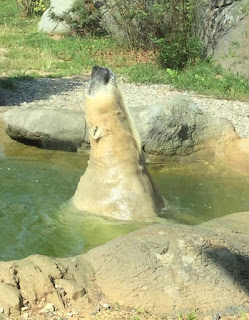 He kept dunking his back and doing the same thing over and over again. I was truly surprised they don't keep him in a dome that's at least 50 degrees Fahrenheit (10C) all the time.
Posted by Adam at 5:00 PM

Nice seeing you two together. At least, he was smart enough to keep cool.

How cool - it looks like he's got a good habitat.

A bit of heat won't hurt him.
Water could be refrigerated to keep him cool
and then there is his frigid den to escape into.
Colin

great you found him!

I'm sure he was having a good time swimming around and playing with that ball floating in the water.

Ice Bears are cool. The zoo in the city I grew up in had one when I was a kid. The exhibit closed though in 1999 though.

he looks like he is sunning himself at the same time:)

I wonder why his exhibit is so out in the open instead of frigid cold? But what do I know about them? ha! Thanks for sharing :)

I enjoyed seeing the two of you together! I hope that the polar bear isn't lonely! I dream of seeing them in Churchill, Manitoba or some wild place like that ~ where I'm safe, of course!