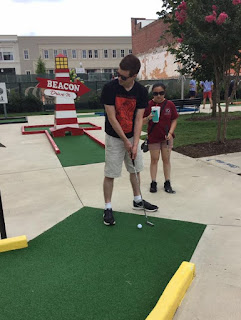 Some might remember me talking about this place two years ago in August, and I honestly can't believe it had been that long. This is a 9-hole mini-golf course that the city had developed for anyone in Spartanburg to play. Or as the Republicans around here call it, socialized recreation. I used to play real golf (due to my brother) so I had my own putter and golf-balls. 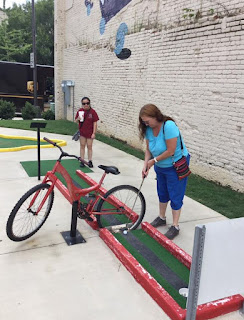 My mother came along too. I remember she used to play with us at a place called Mr. Putt Putt a long time ago in Spartanburg. They tore it down at least fifteen years ago, so she was a bit rusty, but actually a little better at golf than Daisy. 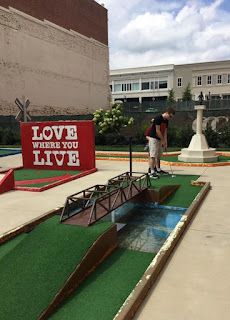 I also found it funny that there is one hole based on the bridge near our house (every one is based on something in Spartanburg) as the first time we went we had not gotten the house yet. The actual bridge is in the process of being rebuilt, so this will be a relic in itself one day. I did notice a lot of the paint there has faded and chipped pretty bad. I hope the city will be smart and have it re-done before it gets into worse shape.
Posted by Adam at 5:00 PM

You guys look like you're having a good time.

This looks like a nice place to visit, I like that each hole represents something in Spartanburg, Happy Birthday.

These mini putt golf courses are fun aren't they.
Like the photos.

I'm glad you guys had fun on your birthday, and that you shared the pics. I totally suck at real golf and have no desire to walk around a 1 hole course to get a ball in a little hole. I am, however, pretty dang good at putt putt golf for some strange reason and love it. Cool that your mom came along for the good times! Hugs...

I remember you posting about this golf course. It really doesn't feel like it's been 2 years. Glad to see that it's still being utilized by the residents.

Ah, I haven't played miniature golf in years. From what I can see in the pics, this course is very different in style from any I've ever seen.

Lord, has it been two years already? I remember your posting about this miniature golf course. Socialized recreation, eh? Too sad!