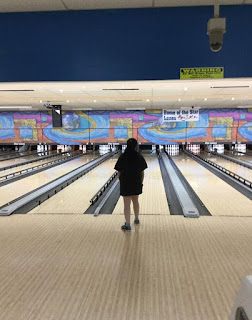 At my work, every year the place is told hold a party to "give back" to the workers efforts. My mother works for the same company (different location) and hers was held in the back of the building where they played bingo for laughable prizes and had food. Our location however, rented out a lot of lanes at a local bowling place which is only a few miles away from my house. I won the first two games against Daisy 107 to 77 and then 144 to 63. She came back later and won 98 to 87 and then 90 to 74. 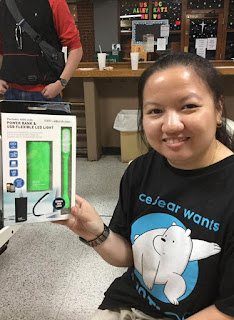 In addition to bowling fun, there were free sodas and several pepperoni pizza laid out. There was also a prize drawing with tickets. Daisy was 38 while I was 39. I think there was about 70 something people there.I heard 37 about midway in, and about five drawings before the end I heard Daisy's 38 be called. So she won this power bank (like an external battery for a smartphone) that also connects to a matching flashlight.
Posted by Adam at 5:00 PM

Sounds like you guys had fun, and congrats on the win for Daisy. It's been years since I bowled, so I imagine my scores would probably suck right now. (lol) Hugs...

Bowling is a lot of fun.

I'm glad that you two had fun!