Question: Do You Believe Trump on Charlottesville? 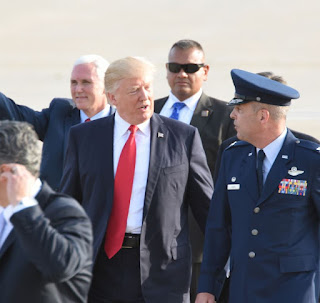 You might be living under a rock if you haven't heard about the events that went down in Charlottesville, Virginia. Far-right activists all of whom were mostly white supremacists and literal Nazis protested the removal of a Confederate statue. Counter-protesters were there to stand up to fascism and hatred, and it all got horrific when a neo-nazi drove his car into a crowd of people which killed a woman. Not long afterwards I saw Trump hold a press conference where he condemned the hatred but blamed it on people from "all-sides". There was only one side wrong there, and it was the far-right, the same far-right that is trying to pass bills that would let their kind run into left-wing protesters blocking streets. Trumpty Dumpty has been adovcating bigotry, hatred, and violence since the campaign trail, and I honestly don't believe he has any remorse for what happened to that young lady in Charlottesville.

I think he was told he had to say more so he did. I don't think he wants to piss off anyone who might vote for him.

I don't believe him at all. The majority of the ALT Right movement is who voted him into office and he wasn't about to piss off his key demographic.

Load of crap as per usual with him

I don't believe anything he says.

Definitely not my chose for this office. It is hard to trust anyone today.

And I believe he got worse since you posted this Adam.
Completely lost his temper at a press conference.
The Turnip Top is the most UNFIT person in the USA to hold
the position of Presidency.
He at this rate will plunge the world into Armageddon.

Why hasn't he been impeached.........have they no BALLS in Washington???
A lunatic.
Now you can see why the Kremlin was so pleased to see him in power and not Hillary (love her or detest her) at least she had experience in diplomacy!
I don't know how the Canadians and Mexicans can tolerate this creature being in such close proximity.
He is UNFIT, UNFIT and disgusting.

Funny how "silence' is golden in some quarters.??????
Cheers
Colin

Not one single solitary word. Horrifying.

It is hard to trust anyone today.

NO. I seriously don´t understand him and the way he behave.

As Colin said, Trump's gotten worse since that first press conference. He should have been at the memorial service for Heather Heyer today. What kind of president tweets an image of himself as a train running running down a reporter just after a domestic terrorist kills a woman and injures 19 others by running them down with a car?

I totally agree, Louise. He should have been at the memorial service of that young woman. And that image of a train running down a reporter is disgraceful. But then, is anyone surprised?