Steve Bannon Out of White House 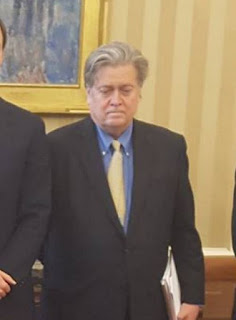 While not officially part of the Trump Cabinet, Steve Bannon was a controversial choice as he was given a special job that had never been made before as Chief Strategist. Many accused Bannon of antisemitism and white nationalism in the present and past, and that certainly got him a job advising Donald Trump. It's rather unclear what made him get fired per se, but that's one less toxic person out of the White House at least. Since his position was made-up, he probably won't be replaced either.
Posted by Adam at 4:06 PM

It is a case of revolving doors........pure chaos and the laughing stock of the World.
Seems that new Marine General is doing a marvellous job......next to go Turnip Top and his dysfunctional family.

I have been interested in US Presidents since JFK but was born in the days (WW2) of Roosevelt - I can't of course recall him or Truman except from history books......Eisenhower - well the start of the intervention in Vietnam and that famous pine that he wanted removed at Augusta National......not removed!
I do not think that the subsequent Presidents since up to this present "madman" have collectively had as much coverage combined in their first 7 months occupying the White House!

Impeach before it is too late!
Colin

It doesn't matter that Bannon is out: Trump still shares and supports his views.

As if it's any surprise. I so look forward to them ALL being gone from the White House... although who knows what's next!

It will be interesting to see what Bannon does in the future.