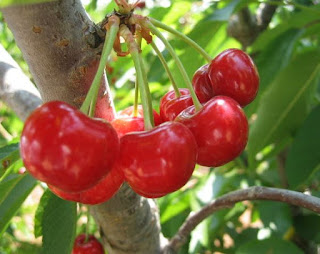 When I worked in produce, we had a guy there named Bryan who was...strange. We had sampled out cherries for the people walking down the aisles, and one lady was so happy that we pitted them beforehand. Pitting cherries is a lot of manual work, and Bryan then got a huge idea in his head. He told me he was going to pit cherries and then take them down to the flea market or something like that. I told him that it wasn't a good idea because of all the work, the refrigeration you'd need, and the fact that once you broken the skin of a fruit/vegetable it doesn't have long until it starts to rot away. If a person really desires pitiless cherries, it'd be a whole lot easier, cheaper, and simpler to get them in a frozen bag at the supermarket. He called me an idiot because I wasn't jumping on his super-cherry bandwagon. Maybe he was right, and he's sitting in his cherry-shaped mansion laughing at me right now.
Posted by Adam at 12:00 PM

It really is a lot of work. I'd rather just spit the pits out.

I agree with Mary and rather spit the pits out too. : )

I doubt his cherry-pitless mansion exists. lol
Love cherries but I have never pitted them before eating them.

I'd rather spit the pits out, much easier that way.

I'll be on the lookout for the cherry-shaped mansion, but not really expecting to see it:)

You were so right

I'm a pit spitter, but I use frozen, pitted cherries for my smoothies. I always enjoy your stories, Adam!

Cherries are so good ...
Loved your story Adam.

HAHA! The ending made me laugh.

I don't he got that bad idea off the ground.

Even with a cherry pitter, it's a lot of work. He sounds like the kind of guy who is always looking to cash in on the next big thing. I don't think his cherry pitting idea did it for him though.

You brought back a memory of pitting cherries with my mom (sour cherries - the kind you would use for baking) with a little gizmo that popped them out. I used to think it was fun, but then I was a kid. Maybe this guy ended up inventing a machine that pits tons of cherries all at once and instantly freezes them. -Jenn