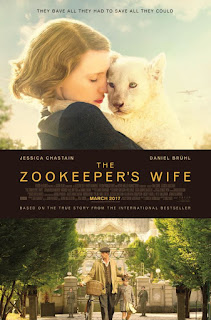 I heard about The Zookeeper's Wife a few months ago I suppose. I wasn't quite sure what the movie was about. It looked like it was about the art of zoo-keeping many decades ago, but...not quite. It's really based on the book of the same name, which is about the true events of the zookeepers Jan and Antonina Zabinski who used their zoo as a way to save hundreds of Jewish people who would have otherwise perished during the Holocaust along with working with the Polish Underground. I also really like Jessica Chastain who is the main star of the movie. 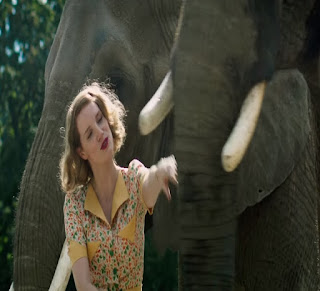 The movie begins right before the Nazi invasion begins. You see the normal days of the Zabinski family who runs a really large and notable zoo in Warsaw, Poland. The matriarch Antonina is very much the best person to take care of such animals. She shows deep concern for them, such as when a baby elephant suffocates and she goes to a great risk to herself to save the dying animal. What will happen soon to their country will change everything forever. Nobody in the Zabinski family would ever realized how their country would be one of the worst afflicted countries during World War II. 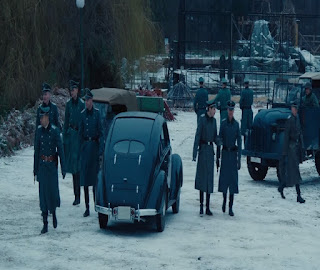 With the Polish Army in defeat, the Germans make their way to Warsaw. But not before destruction fell from the sky and caused their zoo to lose many animals. Now the Zabinskis must deal with the German officer and zoologist Lutz Heck who was at one time, on friendly terms with the family. He offers to send animals to Germany for "safety" but when Lutz Heck starts killing animals left behind before winter, that's when they know his true nature. However when they find Jewish people trying to survive, they decide to do what they can to save them all, using the zoo and their on-paper friendship with Lutz Heck to their advantage. But will they make it to the end of the war before their plan is uncovered? 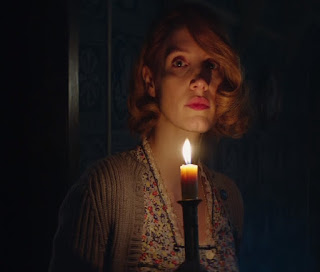 Overall I thought The Zookeeper's Wife was really disappointing. Jessica Chastain is strong here and her character is likable, but the movie has many flaws. For one, the pace of the movie moves like a snail. Another is that the movie makes a lot of historical errors like making Lutz Heck a super-villain when his role in real-life might of been minor at best. I'm not surprised now that the movie had a mixed reaction with critics. It's certainly doesn't hold a candle to The Pianist or Schindler's List when it comes to Holocaust movies.

I think I may see this movie even though it does sound a bit off. One of the countries I visited this summer on my vacation was Poland, starting with a few days in Warsaw and then to Krakow. We saw Schindler's factory while in Krakow and then drove over to tour Auschwitz and Birkenau concentrations camps. A very overwhelming experience. I also spent some time just walking around Warsaw by myself and found it amazing how well the city has recovered, especially after the fall of the USSR. I really enjoyed my time there.

Thanks for review! Want to see this movie!

I'll probably see this movie, although I want to read the book first, which may be better.

I'm going to put the book on my to read list. Sounds good.

I just watched this last week as well. It was hard for me to watch because of the animals( poor camel) even though I know no animals were harmed. I thought it was a good movie, not on the same height as the 2 you mentioned but I thought it told the story quite well. Very braves people for sure.

I was initially interested in this movie but it hasn't gotten good reviews.

I can't believe we have Nazis marching opening in our streets again.