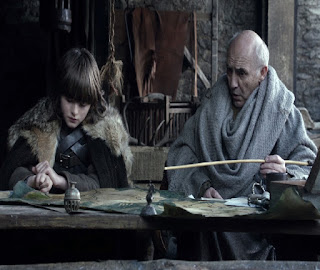 Maester Luwin is a character many forgot, but he was pretty important for House Stark. As a maester, he was the source of medicine and other types of knowledge for those in Winterfell. He delivered (probably) all the Stark children and taught them such as he did Bran who was far too depressed to learn noble house mottos. 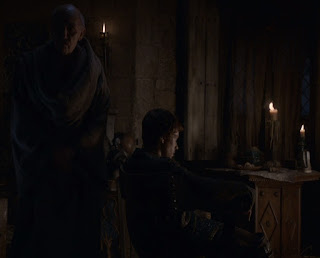 He even serves Theon Greyjoy when he takes the North's stronghold and becomes the de facto Lord of Winterfell. Luwin knew Theon most of his life, and tried to convince him he was a better man. Theon probably should of taken the advice of joining the Night's Watch considering all that went down later. 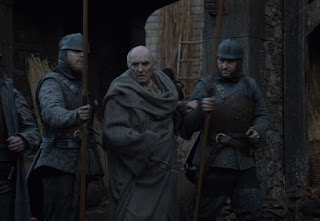 In the show Luwin is killed by the Ironborn who plan to trade Theon to the Boltons for safety. If he had dodged this, then it'd probably be more of his book fate as he's murdered by a Bolton soldier as they sabotage Winterfell.
Posted by Adam at 12:00 PM

I love that you're enjoying a program I like so much.

There are so many interesting characters on this show!

I love that show.

I dread GOT being done. It's been a fascinating run!