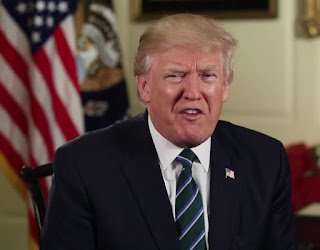 The newest chapter of Republican Big Government began today as Donald Trump publicly backed the Raise Act which in it's current form would give special privileges to immigrants who speak English and have special trade skills as they would get fast-tracked on getting green-cards. This is all a big political F U from white Republicans to Mexican immigrants. Raise Act? More like the Racist Act.
Posted by Adam at 11:00 PM

Donald Trump is the biggest troll. Lately, every single time I turn on the news, there's always something so disgusting coming out of US politics:( I really hope impeachment is next.

Nothing from them surprises me anymore.

Immigration exclusion acts are nothing new for our country. Hopefully this one will go poof! into oblivion, carrying Trump and like-minded people with it.

This "man?" is the most dangerous creature on the Universe.
We here in Australia were enlightened on the early morning news of that "PHONE CALL" between what the then useless White House spokesman called our PM - Mr. Trumbel and "the Turnip Top".
Oh dear if that is the way Turnip Top treats friends, I'd hate to be a leader on the "outer".

Oh where are where are "OUR" friends of Trump............the dowagers and that clown from Springfield???
Colin

He may promote this new version of the Raise Act, but I doubt it will make it through Congress.