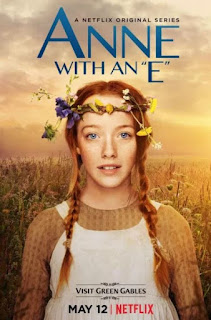 Anne With an E is a new remake of Anne of Green Gables with all works being based on the book series by author Lucy Maud Montgomery. I had never heard of the stories until I met Daisy who told me to watch the TV mini-series starring Megan Follows back in 2010. We also watched the TV series Road to Avonlea which isn't about Anne Shirley but those who live in the same community on Prince Edward Island in Canada. Anne With an E is called a Netflix Original but that's only for those outside Canada, as it's just called Anne on Canada's CBC Television. Now was this new Anne of Green Gables just as good as the one with Megan Follows? 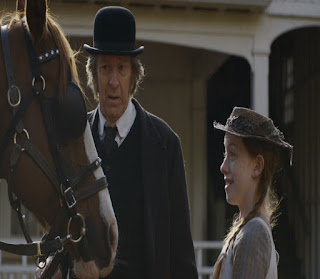 For those who aren't familiar, Anne with Green Gables starts with Anne Shirley, a red-headed orphan who loves to tell stories, though some are made-up or exaggerated. Anne Shirley is thrilled that she is being adopted by Matthew Cuthbert and his sister Marilla Cuthbert. However young Anne is quite upset to learn that there had been a small mistake. The Cuthberts actually wanted a boy as both were getting quite old and needed someone to help with the farm-work. However Matthew has a soft-spot in his heart for Anne and convinces Marilla to give her a shot. 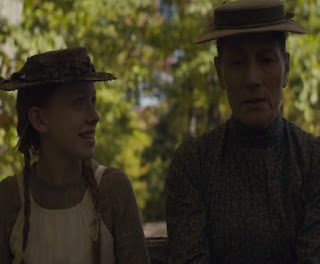 But it doesn't take long for Anne to be officially adopted and put into the Cuthbert Family Bible. But things won't be easy on Anne just because she has two adoptive parents. Marilla's friend Rachel Lynde clashes with Anne and they have a bitter war of words. Anne also gets to go to school where she is belittled by her teacher, and teased by most of the girls and boys in the school. Her only true friend is Diana Barry, who is from a wealthier (and snooty) family than Anne's. Now it's up to Anne to convince the rest of the Avonlea community to like her one person at a time. 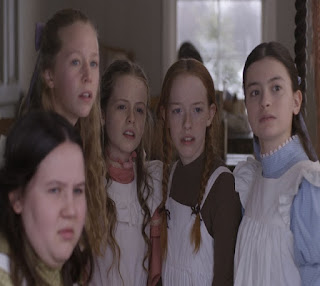 Overall I was impressed but not too impressed with Anne with an E. One of the reasons why is that I know most of the story, so there was a lot of deja vu feelings. In terms of version differences, I'd say Anne and Marilla are about the same between both versions. I liked R.H. Thompon as Matthew Cuthbert though he looks almost nothing like the first Matthew I ever saw, and I also didn't realize he was the same actor who played Jasper Dale in Road to Avonlea. I didn't care much for the new Rachel Lynde, but I thought the girl playing Diana Barry was much better. I hear a second season is in the works, so we will be looking forward to it.

Actually sounds like a sweet story. And goodness knows, we all could use one, amirite?

I never watched any of the series-I found them boring

RH Thompson is one of my favourite Canadian actors.

Megan Follows will always be Anne to me. It was 1985 when that one came out and we watched it all the time growing up.

I loved the books when I was in school. Haven't seen this one yet though.

I added this to my Netflix List to watch some time ago, and haven't gotten around to checking it out, so I appreciate the review. I definitely plan to see this one soon. Hugs...

The moment I saw the title of your post I knew that it would be about "Anne of Green Gables." I grew up reading her books. L.M. Montgomery was a second cousin to my grandmother, and I visited Cavendish Beach lots when I was a child, also the Green Gables house. Cavendish was the fictional Avonlea. I read "Anne of Green Gables" aloud quite a few years to my third graders, and I nearly always found a way to show the 1985 movie with Megan Follows. I thought Follows was the perfect Anne. I'm happy to hear that Daisy introduced you to Anne!

I looooooved it..and loved that actress that plays anne.