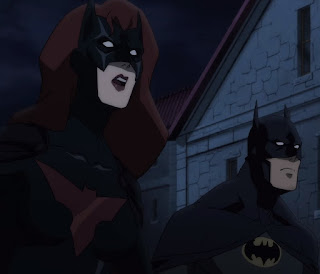 While the Dark Knight hasn't gotten a true stand-alone film yet since the end of the Christopher Nolan's and Christian Bale's Dark Knight trilogy, in the animated DC movies he's gotten plenty of them. I saw Son of Batman about a year ago which was about Batman's secret son Damian Wayne which he had with Talia al Ghul though Bruce Wayne didn't know of his birth for many years. This one serves a sequel to that story as Damian Wayne plays an important role in this movie too. Seems all the Bat Family is going to signing up for this one as well. 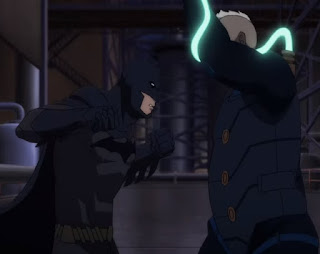 The movie starts with Batwoman, not Batman fighting a dark gang in the depths of Gotham City. The thugs are shocked to realize it isn't the Dark Knight, but a lady superhero. Ironically Batman comes along to help her out. However they face a man called the Heretic who wears a mask that resembles a bat. In an tough battle, Batman appears to die against the odds though a body is never found. Batwoman (whose real name is Kate Kane) is utterly shocked. However the whole city of Gotham might not know what to do without their greatest champion around. 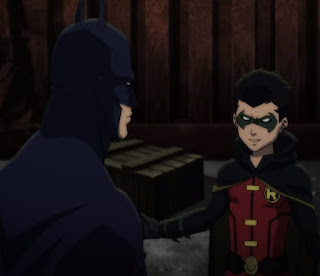 This causes Alfred to use technology to take Bruce Wayne's image and voice to trick his board of directors into thinking he's on a far-off trip on company business. Batman's old Robin who is now the superhero Nightwing comes to Gotham and takes a spare Bat-suit and becomes Batman for the time being. Bruce Wayne's biological son Damian Wayne comes to Gotham as the new Robin as well to help his "brother" out. However they'll need all the help they can get if they're going to figure out what happened to the real Batman. 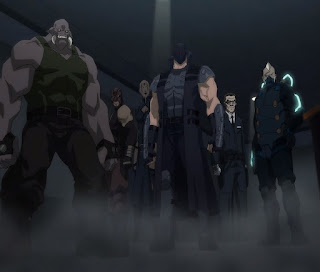 Overall I was a bit bored by Batman: Bad Blood. It's based on a legitimate comic-book story-line but I hear the original comics had a grimmer story-line so they kind of dilute it with happy endings, different characters, and whatnot. The DC animated movies have had some pretty high marks (including Under the Red Hood) but this was is more in the mediocre range. While the voice-acting and animation is pretty good, the story could have been so much better.

I don't think this would be for me.

I think I'll pass. So many movies ~ So little time! I hope that you and Daisy are enjoying a great weekend together!