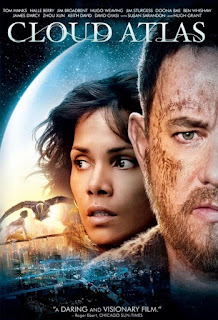 I had only recently found out about Cloud Atlas of which I either didn't know exist or just ignored enough where I didn't recognize ever seeing it. Funny enough, it's got a pretty stellar cast and is one of The Wachowskis' films of The Matrix fame. It's based on a 2004 book of the same name, so the story isn't "original" like The Matrix was, but the novel had gotten pretty good reviews back in its day.  I had originally thought it would be fairly sci-fi like most of The Wachowskis films are, but not quite. 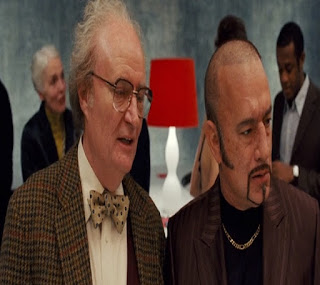 The film consists of six different stories told by an old man to his grandchildren. The first is during 1849 in the Pacific Islands with an American lawyer named Adam Ewing who meets a person who will change his life on a ship. The next is in 1936 in Edinburgh and Cambridge where the story is about a young man named Robert Frobisher who becomes an assistant to an aging but brilliant composer. The next is in San Francisco in the year 1973 where a woman named Luisa Rey learns of a deep dark secret. Then there is London in 2012 where a book publisher named Timothy Cavendish sees his client's book soar in popularity after he goes to jail for murder of a book critic that hated his book. 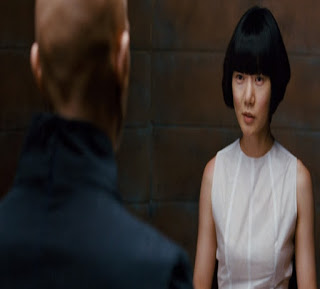 The next story takes place in the city of Neo Seoul 2144 in a futuristic Korea. A human clone named Sonmi-451 is "born" to be a low-level servant, however thanks to help from a "friend" she becomes quite a revolutionary.  The final story takes place in the year 2321 over a century after a "fall" in mankind. The setting is Big Isle in Hawaii where a man named Zachry is part of a rather peaceful tribe in a now-primitive world. However his people aren't the only ones there as savages often come to hunt them. 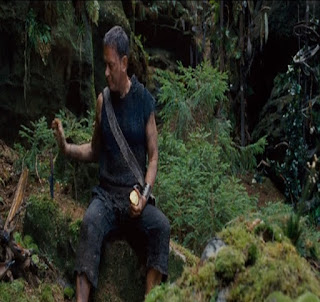 Overall I was really disappointed by Cloud Atlas. While you have some pretty awesome acting from Tom Hanks, Halle Berry, Jim Broadbent, especially Hugo Weaving, and many others; the story is a mess. It almost flows like Game of Thrones as you see different characters and locations (many of the actors have a character for each era), but the stories aren't that connected and the whole point of the story makes little sense to me. It's also like three hours long and that's pretty lengthy for a movie with plots that aren't that detailed.

Hm, I think that it is not really my kind of movie!

Heard it was blah, so skipped it.

If you'd given it at least a "B" I might have made an effort to watch it.

I tried watching it and gave up on it..not even half way thru..sucked..

I thought it was okay, although it was not as good as my expectations. It's true that you really have to pay attention in this movie because it is narratively and visually jam-packed. I liked how there were visual and thematic and sometimes character linkages between certain of the stories. And it was the first movie I ever saw Ben Whishaw in, and I became an immediate fan of his.

David Mitchell's "Cloud Atlas" was one of the best science fiction books that I've read. I read it from beginning to end and then shell by shell. I enjoyed the movie, except I can't imagine how anyone who hadn't read the book could follow it. The dialect the people spoke in the Big Island/2321 section was hard enough to read, let alone follow in the movie. It should have been subtitled. And the Big Island sure didn't look like the Big Island to me ~ rather preposterous! It's been my experience that a movie can never match my imagination. "Cloud Atlas" is one of those great books in my life that I hope to read again.