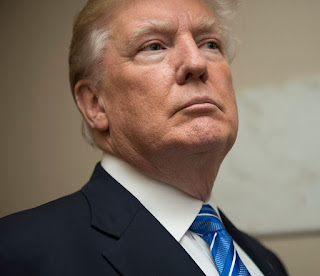 Donald Trump, no stranger to speaking his mind, recently harshly criticized NFL players who kneel during the national anthem in an effort to protest racism in this country. Who knew a multiple-time draft dodger (who is currently being investigated for Russian-ties) cared so much about patriotism?  Trump has called these NFL players some nasty names, and (in a huge blow to free speech) insisted the NFL fire these players. Yet Trump wasn't so harsh on Nazis and other white supremacists at the Civil War protests. Is this really about patriotism? I doubt it.
Posted by Adam at 12:00 PM

Trump know nothing about patriotism, which someone once called the last bastion of scoundrels, and he knows nothing about acting presidential.

he is not a really patriot he only talk about it !

Attacking private citizens is not very presidential. But who is really surprised by anything he does?

Nothing this hypocrite does surprises me anymore.

He is unpresidential in all aspects.
He blunders from worse to worse........how far can he go.
Like the idiot in North Korea, he is like a little spoilt
boy ( apologies to the boys of the world) making an utter fool
of himself. Loved his visit to ALABAMA!
He would have been right at home with the "Hill Billies" of that
state!
Funny Adam, no comments from the Southern Bible Bashing/Tea Party
group????
Have they all disappeared down the gopher holes????????????
Colin

Just when you think the US president couldn't do anything more stupid, he just surprises the world every.freaking.day When is the impeachment? And I'm sorry, but that crowd in Alabama cheering for him....what is wrong with these people that they can't see how he's destroying your country?!?! :(

Nothing like a heel spur or two to avoid the draft. Bet Trump's doctor got a handsome fee for that diagnosis. My first husband was a Screaming Eagle with the 101st Airborne. He volunteered at seventeen, and the army held him over a year before he was to go to Vietnam. He was paralyzed in an accident while traveling to ship out to Vietnam. All the men in his unit were killed in Vietnam. My husband always felt horrible that he hadn't been with his unit when they died. He kept thinking he might have been able to make the difference that would have saved them. Trump shames the meaning of patriotism.