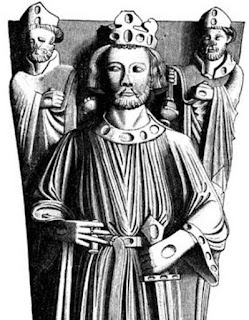 Since King John had several legitimate and many illegitimate children, the number of his descendants grew into thousands within just a few generations. Many centuries later, it's more than probable than almost anyone with English (and to a lesser but still considerable extent other European) ancestry is related to King John as the number of ancestors you have had since then is more than the population during his lifetime. A study had found that every U.S. President from George Washington to Barack Obama with the exception of the Dutch-American Martin Van Buren, was descended from King John.
Posted by Adam at 12:00 AM

Wow, that is incredible!

Damn, he sure knew how to get around

This seems comparable to Ghingas Khan who had tons of kids and most from Mongolia are direct descendants of this man.

I wouldn't doubt he's the ancestor of 98% of Asia.

Wow, he sure has a lot of progeny.

and about triple that for Genghis Khan

King John's reign was a major turning point in history because he had to agree to the Magna Carta. Many regard this document as the beginning of the freedom of the individual over the ruling of absolute kings and dictators.